10 Tax reforms for a better Ohio

10 Tax reforms for a better Ohio

Good schools, responsive public safety, reliable public transit, quality healthcare – these are the building blocks of thriving communities and strong economies. Ohio’s tax policies starve these essential programs while giving the wealthy big breaks—and now, Governor Kasich and legislative leaders are looking to cut hundreds of millions of dollars more from what was already a budget that underinvested in Ohio.

We don’t need budget cuts. Instead, we need to reverse direction on tax policy that has slashed $3 billion a year in revenue since 2005. The income tax has been cut by a third, most of which went to affluent Ohioans. A 2013 break for business owners – expanded since – is costing considerably more than the $400 million a year in cuts Kasich is moving forward with. Policymakers promised us such tax cuts would spur economic growth, but 2016 was Ohio’s weakest year for job growth since the recession.

Ohio’s tax system is upside down and needs reform. We can raise the revenue we need to make needed investments, while also making the system fairer. Here are 10 recommendations for the 2018-2019 budget. 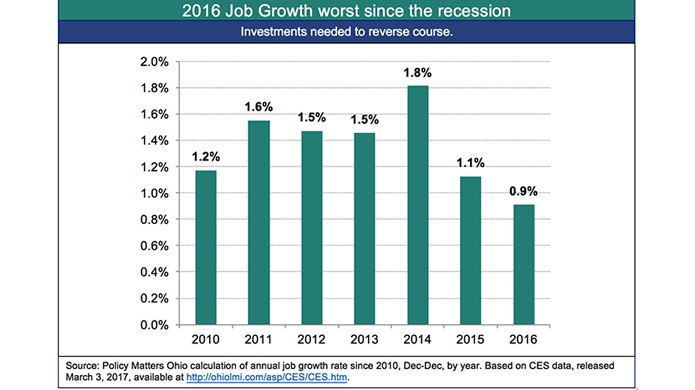 The Ohio General Assembly cut taxes by nearly $1.9 billion for the 2016-2017 budget. Estimates at the time said the top 1 percent of earners would get an average annual cut of more than $10,000. The lowest-earning 20 percent would get an average increase of $20. In his 2018-2019 budget proposal, Governor Kasich doubled down on this approach-- further reducing income tax rates, cutting the number of brackets from nine to five, and raising other taxes to pay for most of the cuts. Under this plan, Ohioans who made less than $21,000 on average would pay $64 more. The top 1 percent, making more than $457,000 would get an average cut of $2,412. Kasich has acknowledged that the $39 million net tax cut that his proposal called for is unlikely to remain. But he is still looking for an income-tax cut, paid for with other tax increases.

Ohio is losing $3 billion a year in revenue due to tax cuts since 2005. Think of all the investment in schools, healthcare and infrastructure that could have been made—and cuts that could be avoided in the next budget. State legislators should begin reform by saying no to the governor’s income-tax plan for 2018-2019 and restoring the top rate of 7.5 percent on income over $210,600. 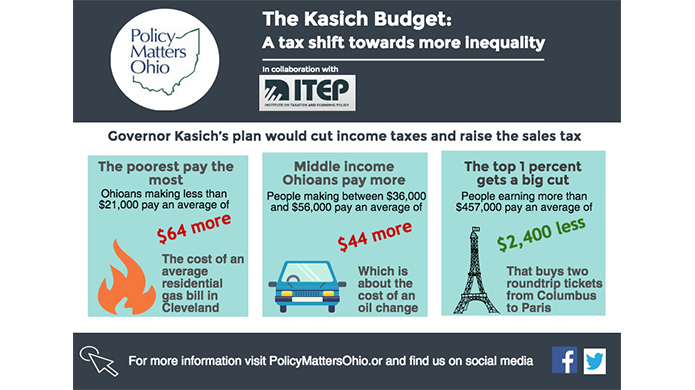 2. Modernize and enforce the sales tax

Ohio must make sure the sales tax covers today’s economy, not yesterday’s. As the service and on-line sectors grow, the tax system has to evolve. State law should ensure, for instance, that sales tax is required on all bookings through Airbnb and other similar platforms. We should extend the sales tax to additional services, such as lobbying and repossession, as Governor Kasich proposed. Meanwhile, we must enforce the current sales tax. Companies like Uber and Lyft should be collecting the sales tax, just as taxis do. Bringing our system up to date also means collecting the use tax (a complementary tax to the sales tax) on catalog and Internet purchases. This tax is due (even if the U.S. Supreme Court has saidstatescan'trequirebusiness to collect it if they don’t have a physical presence). Other states have passed legislation to see that more of this tax is collected, or to challenge the court decision. Ohio should enact a law requiring companies to notify customers that they may owe use tax, as Colorado has done.

County governments and some transit agencies rely on a local sales tax levied on the state base. If state policymakers don’t make the right choice on the Medicaid Managed Care Organization (MCO) tax, counties and transit agencies face devastating cuts. Federal rules require a broadening of Ohio’s MCO tax, which is in the sales tax base. The Kasich administration has proposed a way to do this that would cut local sales taxes by $200 million a year, with just over a year of transitional aid. Without these revenues, counties and transit agencies may have to make deep cuts to services. The state could find a solution that meets federal regulations without cutting counties and transit: legislators can broaden the base of the MCO tax in the sales tax, allow a local tax based on the Kasich administration proposal, or restore support for local government and transit through general revenue funds and flexible federal highway funds.

Ohio is one of 26 states that have an Earned Income Tax Credit (EITC) to help put money back in the pockets of low-income workers. But as Policy Matters has reported, Ohio’s credit is too weak to work. Policymakers should fix Ohio’s EITC and put it on par with other states by making it refundable, eliminating the cap for people making more than $20,000, and increasing the credit amount. 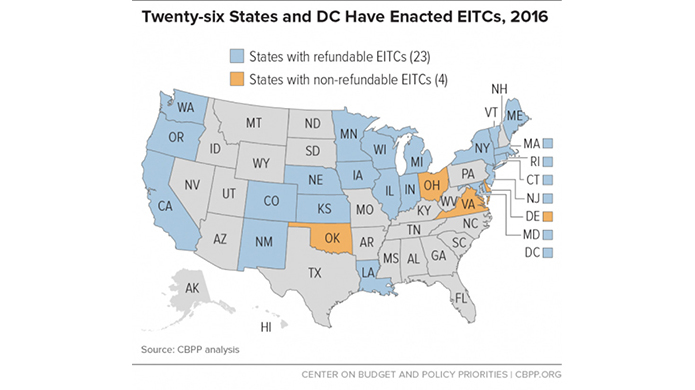 5. Increase the severance tax on oil and gas drilling

Governor Kasich has repeatedly tried to increase the oil and gas drilling severance tax, only to be thwarted by fellow Republicans. Ohio’s current rate is 20 cents per barrel of oil and 3 cents per thousand cubic feet (Mcf) of natural gas. That's one of the lowest rates for oil- and gas-producing states. Kasich is trying again with the 2018-2019 budget. He proposes a 6.5 percent tax on natural gas and crude oil sold at the wellhead and a 4.5 percent tax on sales at later stages of distribution for processed natural gas and natural gas liquids. Kasich would use this revenue to pay for proposed income tax cuts – not a good move,sinceseverance taxes are notoriously unstable. Instead, let’s increase the severance tax and use the revenue to mitigate against drilling’s environmental harms, reinvest in communities affected by drilling, and prepare the state for a more diversified economy after the natural resources are gone.

Recent legislation now allows owners of “passthrough” businesses such as partnerships and S Corporations to avoid paying any income tax on the first $250,000 in profits. (They’re called “passthroughs” because their owners are taxed on the income when it passes through to them as individuals). Any additional profits are taxed at a flat 3 percent rate, well below the nearly 5 percent that would otherwise be paid on income over $210,600. This tax break will cost Ohio $580 million in the year beginning next June and almost $600 million the year after. That makes it the third-largest break in the state tax code. Our stance is simple: get rid of it. As the move to cut spending by Gov. Kasich and legislativeleadersindicates, Ohio needs the money and there is little evidence the break actually helps create jobs. 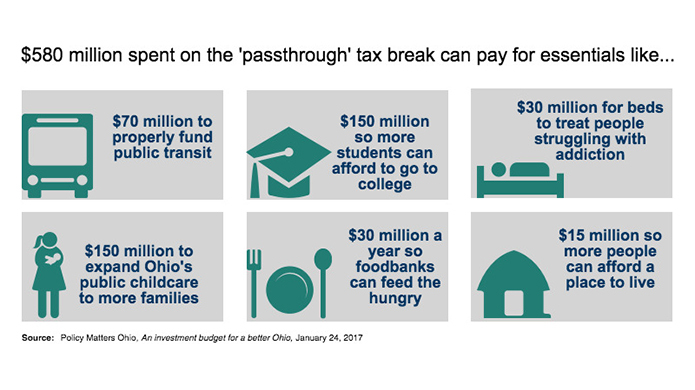 Governor Kasich wants the state to take over collectionof the municipal income tax on business profits. Many cities oppose it, worried they'll lose control over a revenue source that accounts for more than $600 million a year. This state legislature shouldn’t bite. Tax collection should remain in local hands.

Before lawmakers eliminated it starting in 2013, the estate tax generated $258 million or more a year from estates worth at least $1 million. Four-fifths of its revenue went to local governments. If state lawmakers brought back the estate tax and exempted the first $1 million, it would only affect 2 percent of Ohio estates. But it would generate $320 million a year and provide badly needed revenue for local governments. Local governments relied on estate tax revenue to make capital improvements like buying police cruisers and garbage trucks. Now cities like Cleveland are raising income taxes to try to make up for these and other losses caused by changes in state policy.

Many of the 128 breaks in the state tax code should be limited or repealed. Governor Kasich proposed some of these in his executive budget. He called for limiting a huge break on the Commercial Activity Tax (CAT) that goes to suppliers of big distribution centers, doing away with special discounts for paying certain taxes ahead of time, and ensuring that companies do not avoid tax on interest earnings. Ohio should adopt another Kasich proposal and limit the break retailers receive for collecting the sales tax. Two others to chop: the sales-tax cap for fractional aircraft, a $15.7 million annual carve-out that goes to the wealthy who purchase time shares in aircraft; and the net operating loss write-off against the CAT, which allows companies with large losses to keep reducing their CAT, even though their losses occurred more than a decade ago against a tax that no longer exists. Together, these measures would add tens of millions of dollars of revenue a year while making the tax system fairer.

Governor Kasich smartly proposes new layers of transparency for seven business incentive tax credits in the 2018-2019 budget. But beyond that and the tax breaks that clearly need to be limited or eliminated, Ohio needs a broader analysis of exemptions, credits and deductions (known as “tax expenditures”). Last year, House Bill 9 became law, creating a commission to review all of Ohio’s tax breaks every eight years. Often in the name of "job creation," Ohio gives away $9 billion-plus in tax expenditures each year. The General Assembly needs to get an early start on the process mandated by House Bill 9. If we could end some ineffective and unnecessary tax breaks, Ohio could avoid budget cuts and generate revenue for schools, roads, transit, treatment for the drug crisis and more.