Update: On April 27, House Republicans decided to delay this vote after the margins were proving too close to guarantee the bill's passage. Keeping pressure on your representatives to is of huge importance moving forward.

In a race to score a legislative victory before he completes his first 100 days in office this Saturday, President Trump and his administration have been pushing GOP legislators to get in line behind a repeal of the Affordable Care Act (ACA).

Divisions between moderate Republicans and conservative Freedom Caucus members last month meant that the original American Health Care Act (AHCA) never even went up for a vote. Yet yesterday, Freedom Caucus members said they would endorse a newly-amended version, one which makes a very bad bill worse. There is a chance a vote will happen as early as tomorrow. 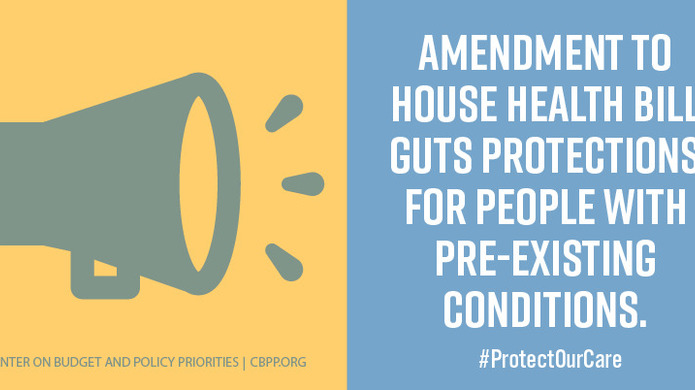 But it also adds more cuts to coverage for the most vulnerable. Under the amended plan, the 133 million Americans who have a pre-existing condition like heart disease, asthma, diabetes, cancer and hypertension would once again face the prospect of not being able to get or afford coverage because they are ill.

And then there are essential benefits: when shopping for health insurance coverage, many would assume plans would cover services like outpatient care, visits to the emergency room, hospitalization, preventative services, pregnancy and maternity services, prescription drugs, mental health services and substance abuse treatment. Yet these, among many other basic services, are “essential benefits” that would lose guaranteed coverage under this plan. The bill again punts the decision of whether and which essential benefits are guaranteed coverage to the states.

Significantly, after word got out yesterday that the bill protects members of Congress from losing their own essential health benefits or being charged higher premiums if they have a pre-existing condition, GOP leaders are scrambling to save face. One would think, if comprehensive coverage is important enough for our representatives, it should be important for everyone.

Now is the time to make your voice heard. Members of Congress need to know that their constituents want protections for people with pre-existing conditions, coverage for essential health benefits and for Medicaid to continue providing service to Americans in need of care. Write your representative. We’ve provided you with talking points to help you craft your letter.

Or if you prefer, you can use ProgressOhio’s tool to call your member of Congress.

Don’t repeal the ACA without replacing it
December 12, 2016