Cleveland residents struggle to afford safe and secure housing. A higher minimum wage would help. More than 66,000 families in Cuyahoga County who rent their homes are considered housing insecure. Those who are housing insecure face hardships including high costs as a share of their income, poor home quality, unstable neighborhoods, overcrowding, or even homelessness. Across the state, wages for the bottom 60 percent of workers remain below what they were four decades ago, leaving too many families with too little to get by. In Cleveland, where more than a third of city residents live in poverty, the problem is acute. 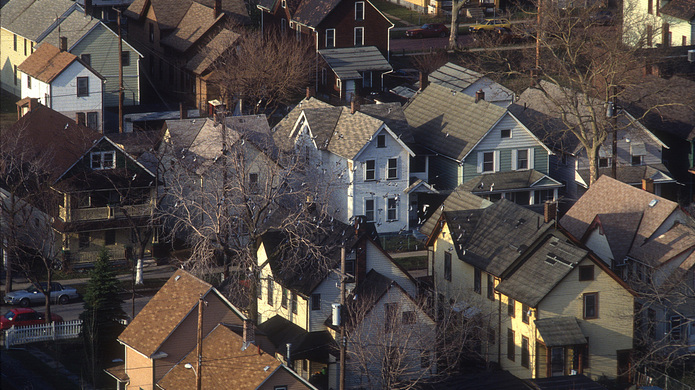 Yet many of those on the margins are working. No one who works for a living should struggle to access a safe place to live. It’s time to implement a living minimum wage across the state. Struggling Cleveland families depend on it.

The National Low Income Housing Coalition found that a full-time Ohio worker must earn $15.00 per hour to afford a two-bedroom apartment at fair market rate. Clevelanders face nearly the same need: $15.02 per hour. The federal ceiling below which housing is considered affordable is 30 percent of income. At Ohio’s current minimum wage of just $8.15, a worker must put in 74 hours per week for the typical two-bedroom apartment, or 57 hours for a single bedroom; and the truth is that many low-wage jobs don’t even provide the traditional 40 hours.

Cleveland is often highlighted as one of the nation’s more affordable cities; it made real estate information site Trulia’s top ten list along with three other Ohio cities. But Clevelanders face more than double the national poverty rate at 36 percent, and residents face special housing challenges. Depressed housing values limit investment in maintenance, leaving poor families to cope with crumbling home quality even as they struggle to make the rent or mortgage. Cleveland’s Slavic Village was the hardest hit community in the nation in foreclosure filings. Neglected housing infrastructure exposed Cleveland children to lead poisoning at nearly three times the rate in Flint during that city’s water crisis. In Cleveland, where 17 percent of children under six tested positive in a five-year period ending in 2014, the culprit was peeling lead paint.

Safety net programs designed to ensure access to safe housing are overextended and under fire. Cleveland Metropolitan Housing Authority has closed its waiting list to new applicants due to inadequate funding. Funding to the Ohio Housing Trust fund has been cut in half since 2005 and sees no boost in the budget now before the state legislature. Accounting for inflation, it fell from nearly $91 million in FY2005 to just $42 million in FY2015.

The irony is that so many Clevelanders who struggle with poverty and insecure housing are working. The Working Poor Families Project found that nearly half of Ohio families below the poverty line, and 70 percent of those under 200 percent of the level, had one or more family members in the workforce. A living minimum wage is vital to enable Cleveland residents to access safe and secure housing.

A forthcoming report by Policy Matters Ohio found that a $15 minimum wage phased in by 2025 would bring a raise to 71,000 Clevelanders, about 27 percent of the workforce living in the city. That report noted that inflation would erode the value of the wage before it took effect, pressing its value to about $12.50 in today’s terms.

States and cities across the nation have begun to pass robust living wage laws. A measure now before Congress would raise the federal minimum wage to $15 per hour by 2024. Ohio must act to ensure that all workers earn enough to afford the basics – especially safe housing. Clevelanders should support a statewide effort to raise the minimum wage.