Having been raised from the dead several times in rapid succession, the GOP health care bill is starting to get a reputation as “zombie legislation.” But the thing to remember about zombies is that even though they’re dead, they can still do a lot of damage. 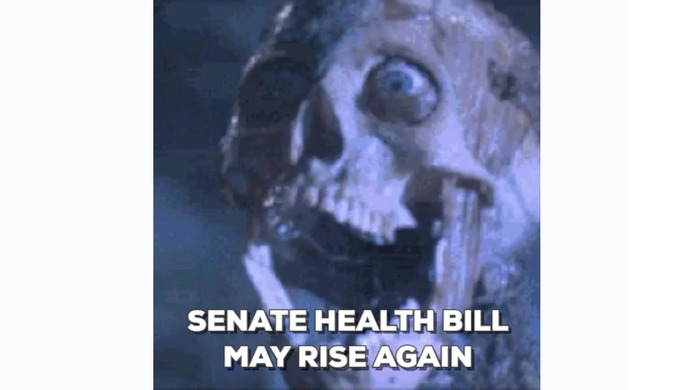 Let’s count the ways the Senate bill has been resurrected this week alone. First, Senate Majority Leader Mitch McConnell (R-Y) announced another delay to a vote on the Better Care Reconciliation Act (BCRA) last weekend, because Sen. John McCain (R-AZ) (who has since been diagnosed with brain cancer) was recovering from emergency surgery. Without McCain, Republicans lacked enough support to bring the bill to the Senate floor, much less to pass it.

Second, on Monday, Senators Mike Lee (R-UT) and Moran (R-KS) announced their opposition to the BCRA, effectively putting an end to the bill before it even went to the floor. But immediately following this news, McConnell and President Trump announced Plan B: to repeal the Affordable Healthcare Act (ACA) without a replacement plan. Just hours after that, Sens. Shelley Moore (R-WV), Lisa Murkowski (R-AL) and Susan Collins (R-ME) said they would oppose a motion to proceed on debating repeal without replacement. That’s enough Senators to shut it down.

Some are saying the legislation has collapsed under its own weight, but the GOP’s need for a health care win should not be underestimated. President Trump met with most Republican Senators on Wednesday to rally the troops. Now he’s demanding a vote on repeal without replacement, even if it’s doomed. At the same time, talk of more pay outs to Senators (like Ohio’s Rob Portman) who are on the fence are mounting.

To GOP leadership, a health care win seems far more important than the many ways this legislation will mess up American lives. Every version of the bill we’ve seen from both the House and Senate:

On the bright side, the past six months of debate around the wildly unpopular House and Senate bills has helped Americans articulate what’s important to us in health care coverage. Many people have become rightfully concerned about whether or not they will be able to afford or access meaningful health coverage in the future. Many now understand how important Medicaid is as a provider of care for a huge number of Americans. Many more realize that having a large percentage of uninsured Americans costs hospitals money and leads to medical emergencies that are avoidable when people have access to ongoing, preventative care.

It would be nice to think the unpopularity of the House and Senate bills would be enough to shut down efforts to dismantle Medicaid, eliminate Medicaid expansion and deregulate the private insurance market. But the truth of the matter is these fights are simply shifting fronts, and will continue to do so. (Medicaid, for instance, faces cuts and caps in the 2018 federal budget.)

So, no matter dead it looks, we have to assert over and over that quality, accessible, affordable coverage for Americans of any income is simply nonnegotiable.

If you would like to reach out to Senator Portman directly, you can email him, call him or show up to some of events going on across the state this weekend.

Columbus: Our Lives on the Line Flash Mob & Community Potluck

Dayton: Rally for Healthcare, Our Lives are on the Line

The sad truth about the House health care bill
May 4, 2017
Protect our care! New bill puts healthcare of millions at risk
April 27, 2017
The benefits of Medicaid expansion
July 7, 2015