After a whirlwind day on federal health care yesterday, here’s a quick re-cap on where things stand. With the help of Senator John McCain (R-Ariz.) (who flew into Washington after emergency brain cancer surgery) and a tie-breaking vote from Vice President Mike Pence, the GOP narrowly passed a motion to proceed. Despite issuing a statement that expressed his reservations, Ohio Senator Rob Portman voted for it. 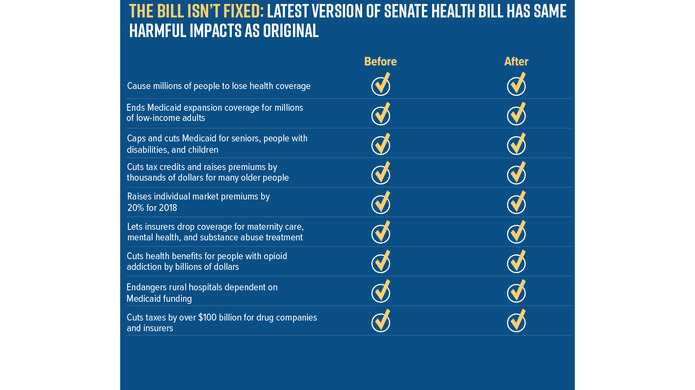 Unprecedentedly, Senators didn’t actually know what legislation they were bringing to the floor with this vote. Yet, some form of health care legislation got a motion to proceed, by 51-50, the narrowest possible margin.

Because of the Senate’s simple math, where Republicans outnumber Democrats 52-48 and not a single Democrat supports this legislation, GOP leadership is working to get health care legislation passed under a process called reconciliation. This allows passage with a simple majority vote. If a bill does not square with reconciliation rules, then a 60-person majority is needed for passage.

This came into play last night. The first thing brought to the floor was a procedural vote on the latest version of the Senate health care bill (the BCRA), which failed 57-43. This means the BCRA would have to be substantially re-worked in order to pass under reconciliation (or pass at all, really).

The Senate voted on a version of the BCRA that included Senator Rob Portman’s amendment for a $100 billion payout to Medicaid expansion states ($100 billion less than figures initially reported under negotiation). Keep in mind, even the $200 billion originally on the table was called grossly inadequate to assist the 723,000 Ohioans, much less the millions across the country, whose coverage would likely be lost if the BCRA eliminated Medicaid expansion. Sens. Ted Cruz (R-Texas) and Mike Lee’s (R-Utah) amendment — which would allow insurers to offer stripped down plans similar to ones you might remember from prior to the ACA — was also included in this vote.

Despite how confusing this all is, push-back on this legislation has packed a punch. The margins on this are as slim as they can be, despite much pressure to get something passed. Senators and Representatives need to keep hearing from us on what matters in health care.

A very possible outcome of this week’s chaotic voting would be narrow passage of a stripped-down version that would send the legislation to Conference Committee. If this happens, it means negotiations that have already been markedly secretive would become even less visible: no drafts for review, no public hearings and no way for non-committee Senators to weigh in.

If that were to happen, we can expect another version of the same core bill we’ve seen over and over again, meaning:

Let Sen. Rob Portman know this bill hurts Ohioans and no amendments can fix it. He must vote against it moving forward. Stakes are high. Please weigh in.

PS: If you’re calling Sen. Rob Portman, his lines seem to be pretty tied up this week. That’s good news! Here are several options if you find it hard to get through. Email him or call him at: