As the Cassidy-Graham bill poses the biggest threat to the Affordable Care Act to date, health care for thousands of Ohio school children also hangs in the balance.

Congress is on the brink of passing a bill that provides health insurance for thousands of Ohio’s school children over the next two years. The Children’s Health Insurance Program (CHIP)—which covers 9 million low-income kids nationwide—expires at the end of September. The Senate and House are considering a compromise bill that will re-authorize funding for CHIP through 2019. While this helps keep Ohio children healthy today, the compromise stops funding in 2021, disproportionately harming children in Ohio’s most vulnerable school districts. 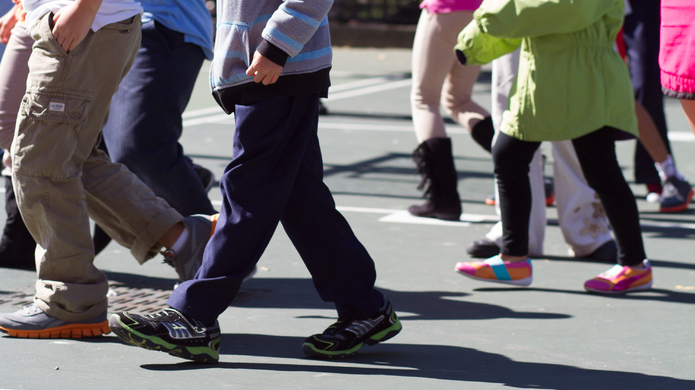 CHIP is a longstanding, popular, bi-partisan program that provides health insurance to children from low-income families who do not qualify for Medicaid. Income and age requirements vary by state, but generally, CHIP covers children with incomes between 133 and 200 percent of the federal poverty line or roughly between $27,000 and $41,000 for a family of three. In Ohio, CHIP and Medicaid work together to cover more than 1 million kids.

Children need quality health care to succeed in school. Kids with access to health care are more likely to receive the timely and appropriate physical and mental health services. CHIP and Medicaid bolster academic performance, test scores and attendance. Kids who receive coverage through programs like CHIP and Medicaid are more likely to graduate from high school and college, and are less likely to drop out. Medicaid also provides over $80 million of needed funds to Ohio public schools to pay for services for students with disabilities.

The current bill. sponsored by Senators Wyden (D-OR) and Hatch (R-UT), extends CHIP for five years. It maintains the 23 percentage point increase in federal funding that CHIP received under the Affordable Care Act (ACA). However, this funding only lasts through 2019; funding is halved in 2020 and eliminated in 2021. After that, states return to original federal funding levels of about 70 percent, down from the current rate of 96.6 percent. The compromise will likely include a required maintenance of effort (MOE), so states cannot scale back on coverage as funds fall.

This compromise postpones the pain for thousands of Ohio families who rely on this program. Overall, CHIP and Medicaid cover more than half of students in 13 percent of Ohio’s schools. The high rates of CHIP/Medicaid are most heavily concentrated in Ohio’s most rural areas. In completely rural areas, with populations of 2,500 or fewer, the average school district has 48 percent of students covered by Medicaid/CHIP compared to the average of 29 percent in metro areas of 1 million or more. 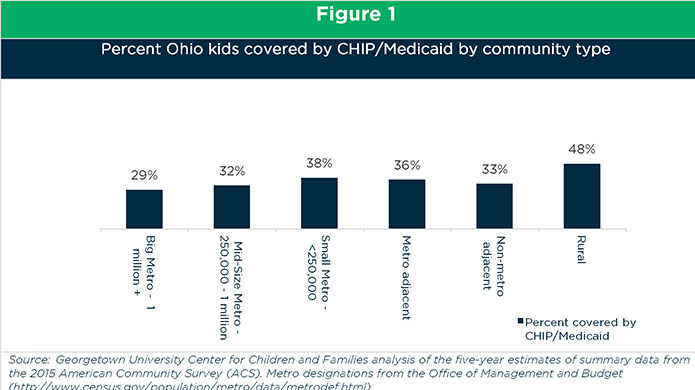 The concentration of children who receive health insurance through CHIP and Medicaid varies district by district throughout the state. For example, Medicaid/CHIP covers fewer than 1 percent of students in the Ottawa Hills district outside Toledo. In the Youngstown City school district on the other hand, the programs cover 80 percent of students. Seventy-three percent of students in the Cleveland Metropolitan School are enrolled. The high number of students enrolled in the combination of CHIP and Medicaid demonstrates how essential these programs are to make sure Ohio’s kids get the education they need to become strong, thoughtful and healthy Americans. 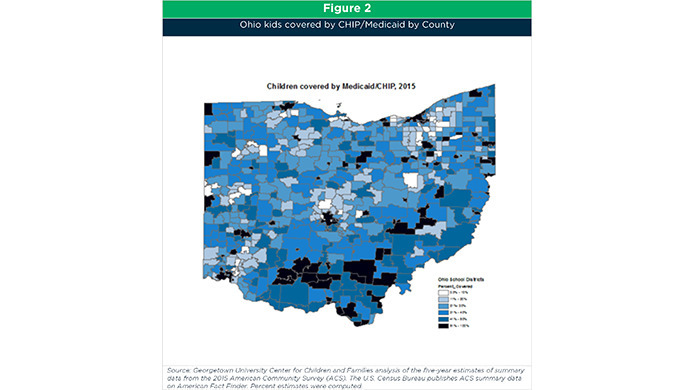 Ohio schools and students win when children in Ohio have both CHIP and Medicaid; together these provide comprehensive coverage and help facilitae access to health care. If CHIP is not re-authorized this month, Ohio and 26 other states will exhaust funding for the program between January and March 2018. This could force thousands of children to move to marketplace coverage or simply lose it because their families can’t afford the out of pocket costs. Re-authorizing CHIP would maintain health insurance for Ohio’s children this year. That’s a good thing. However, if the Hatch and Wyden compromise passes, by 2020 state policymakers will need to find other ways to fund CHIP or else Ohio’s children, especially those in rural communities, will suffer.