Tell Congress: No giveaways for the rich!

Tell Congress: No giveaways for the rich!

On Thursday, October 26, the U.S. House of Representatives is expected to pass the Senate budget resolution, clearing the path for a tax overhaul mirroring the plan announced by President Trump and GOP leadership a month ago. The Senate budget resolution would allow the tax legislation to pass rapidly with only a simple majority and without the kind of debate that such major changes warrant. It’s not a good deal for many Ohio families. Tax cuts for many middle and lower income families are minor. Their gains may be entirely wiped out as larger deficits caused by the tax plan force budget cuts to programs that help them attend college, put food on the table or access health care. 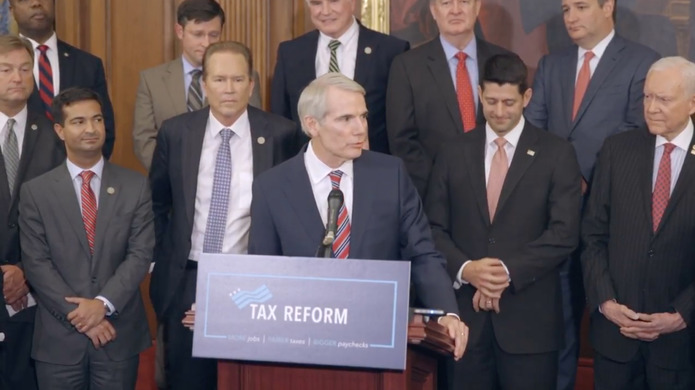 We already know the tax-cut bill would largely benefit the top 1 percent of households and profitable corporations, while increasing deficits by $1.5 trillion over the next decade. The true cost, with no budget gimmicks, could be even higher.

In Ohio, the richest 1 percent of earners – making an average of $1.5 million a year - would get an average tax cut of $56,000 a year, while a family earning an average of $74,500 might get a cut of around $410 (although almost 23 percent of the families in that income bracket might see a tax hike). The real threat to Ohio families comes from the fact that the cost of these lopsided tax cuts would be added to federal deficits, which will create enormous pressure for future cuts to subsidized student loans, health care coverage for people with disabilities and for elderly parents who have outlived their savings, and more.

Tax cuts will lead to larger deficits (claims that tax cuts pay for themselves fly in the face of decades of experience and credible, mainstream economic research). We’ve seen this movie before. Once the deficit grows, those who supported the tax cuts will likely point to government spending as the culprit. Next, they will call for the kinds of deep cuts to health coverage, food assistance, job training, transportation, education, and other critical services that have been proposed in the Trump, House and Senate budgets.

Cuts to Medicaid and Medicare health care will pay for the tax cuts.

The congressional budgets call for ending the Medicaid expansion, abolishing the Affordable Care Act and the marketplace exchanges, and dismantling the eligibility structure that allows flexible response to emergencies and recessions. In Ohio, Medicaid is the largest single insurer in the state, covering more than a quarter of all Ohioans, more than 3 million people, including 1.2 million children. The single largest category of spending is for elderly and disabled people.

The elderly will be hurt by the proposed cuts.

Families caring for family members with disabilities will be hurt.

Families with students would be hurt.

Low-income, working families with children would be hurt.

Those cuts could happen as soon as next year. Call or email your congressional representative and tell her or him to: