Bag it! New fee could reduce disposable bag use in Cuyahoga County

Bag it! New fee could reduce disposable bag use in Cuyahoga County

Posted on 11/27/17 by Intern Writer in Local Sustainability

Cuyahoga County would join a growing list of communities that place small fees on disposable bags used to bring products home from stores, if a recently proposed ordinance is approved on December 12th. Similar fees have reduced use of disposable bags, curtailed litter, and created a funding stream for environmental clean-up or other purposes.

Proposed legislation in Cuyahoga County would place a 10-cent fee on each plastic or paper bag provided by grocery or department stores. The fee would apply to establishments of more than 7,000 square feet, including supermarkets, stores and restaurants, starting next July. 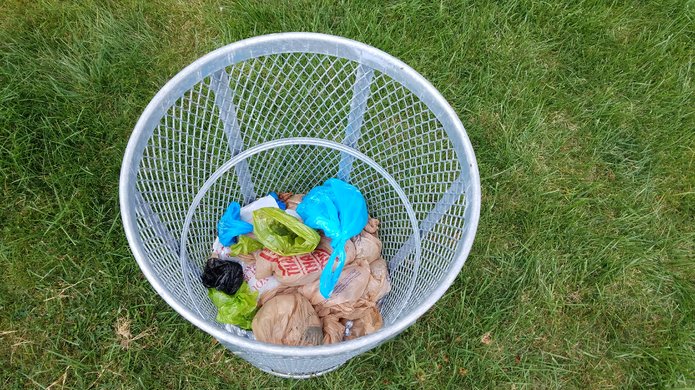 For each 10 cents collected, 6 cents will go to a new environmental remediation fund for waterway cleanup, litter remediation, and other environmental efforts, and to provide reusable bags to economically struggling consumers.

There are many reasons to limit use of disposable bags. Both paper and plastic bags require energy and natural resources to be produced and create pollution in the production process. Both add substantially to landfill waste. Disposable bags are a major polluter globally, littering streets and fields, and killing land animals and marine life. Councilmember Sunny Simon, a co-sponsor of the legislation and the leading proponent, says that 5.5 million pounds of plastic contaminates Lake Erie each year, some of which comes from other sources.

According to the Natural Resources Defense Council, the average American family carts home 1,500 plastic bags each year. The average Cuyahoga County resident uses 341 plastic bags a year, only 10 percent of which are recycled.

Reducing bag use can mitigate harm to oceans, rivers, lakes, forests, and the wildlife that inhabit them. Even when disposed of properly, plastic bags take between 10 and more than 100 years to break down and may not ever decompose fully, instead decomposing into tiny pieces of plastic that remain in the environment. If not disposed of properly, the bags can pollute waterways, clog sewers and contaminate oceans.

The ordinance would add Cuyahoga County to the growing number of American communities that tax or ban use of plastic bags. Portland and Chicago implemented plastic bag fees over the past year. Use of plastic and paper bags dropped by 42 percent the first month after a 5-cent tax was imposed in the city of Chicago. More than 200 counties and municipalities across the United States have enacted ordinances imposing a fee on plastic bags or banning them outright.

Countries around the world have also been implementing plastic bag bans or taxes, citing pollution and waste management. Dozens of countries, including Denmark, Ireland and Wales, levy taxes or fees on retailers or consumers who used plastic bags, dramatically reducing their use by 90 percent and more.

The proponents of Cuyahoga County’s proposal have taken steps address concerns that could be raised. Of the 10-cent fee, 4 cents would go to the retailer presumably to address increased costs they might face. This also serves the political goal of muting retailer opposition, which has defeated proposals in other places.

Customers on federal food assistance (the Supplemental Nutrition Assistance Program) would not have to pay the fee, helping to address concerns about financial hardship. The county is also encouraging distribution of free reusable bags at libraries, senior centers, city halls and community centers, using a small portion of fee revenue to assist in that effort.

Throw-away bags impose costs on the community, creating pollution and litter in both production and disposal. A modest fee like the one proposed in Cuyahoga County can dramatically reduce bag use and provide a funding stream to partially mitigate the costs these bags create. This thoughtful proposal deserves support.

If you live in Cuyahoga County, call or email your council member and urge them to vote yes.