Ohio’s congressional districts have extreme partisan boundaries – among the worst in the country, according to the non-partisan Brennan Center for Justice. The result is a congressional delegation that does not represent the preferences of Ohio citizens. Outrage over this issue in Ohio inspired a bevy of non-partisan groups led by the League of Women Voters and Common Cause to propose a ballot initiative to fix our process for drawing districts, as many other states have done. The groups are gathering signatures now to put a real reform proposal on the November ballot.

After intense criticism from the public and the media, Republicans are walking back from a proposed constitutional amendment, Joint Resolution 5 (JR-5), that seemed designed more to take the wind out of the true reformers’ sails than to fix the problem. Senate President Larry Obhof has said, as he should – that there will be no vote on redistricting reform without citizen coalition support. Sen. Matt Huffman, who sponsored JR-5, has agreed to proceed only with significant bipartisan support. Interested parties have been meeting to hash out a solution.

Huffman and Obhof are right to only move forward with something the coalition, called Fair Elections = Fair Districts, and both parties can get behind.

This should bother voters regardless of party. A Republican living in U.S. Rep. Marcia Fudge’s district who wants to ask her to consider his position would find himself talking to the staff of someone who won by 60 points. Similarly a Democrat wanting to raise a concern with U.S. Rep. Bill Johnson would be pleading her case with a congressperson who won by 41 points. Neither legislator has much reason to listen to constituents.

The results of this district manipulation are glaring. In 2016, when the average margin of victory for Ohio's 16 congressional races was 36.3 points, the closest race was not close at all, decided by 18.4 points. Since 2012, the first election using the current maps, not a single seat has changed parties. Ohio’s electorate has fluctuated between 46 and 60 percent Republican in the number of votes cast over the past decade, yet Republicans hold 75 percent of the congressional district seats in the state.

The Ohio Constitution calls for the process to be conducted by agreement of the Ohio House and Senate, with the Governor having veto power. The Republicans totally controlled the process each of the last two times the maps were drawn – dictating the maps used to determine districts over an 18-year period between 2002 and 2020. 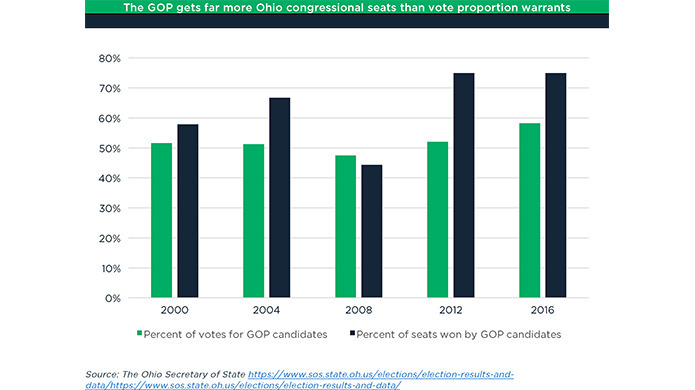 This level of gerrymandering gives all voters fewer choices because districts are not competitive. Districts that lean heavily in one direction or the other mean that the real competition happens in the primary and elected officials are far more tied to their parties than their voters. Increasing competitive districts helps keep elected officials more accountable and responsive to the average voter.

Other states such as California, Arizona, and Iowa have completely removed elected officials from the redistricting process and opted to instead use independent commissions. States that use these commissions have seen a dramatic increase in competitive elections and voter turnout.

JR-5 as proposed is deeply flawed, prompting some advocates to dub it the “Permanent Gerrymander Act.” Lawmakers initially aimed to put this measure on the May primary ballot. Now Senators say they want support from the coalition before putting anything before Ohio voters this spring. It’s a testament to Ohio citizens and members of the Fair Elections = Fair Districts coalition that JR-5 is now being negotiated.

The gap in congressional representation hurts the citizens of Ohio by weakening their voice. Other states have created systems that proportionally and accurately represent their voters and encourage citizens to vote. Ohio needs to do the same. JR-5 as originally proposed is not the solution. Along with Ohio citizens, we’ll be watching what emerges from current talks.