Paid family leave pays off, but too few Ohioans have access to it

Paid family leave pays off, but too few Ohioans have access to it

If my due date holds, my husband, step kids and I will welcome a baby boy in June. This is my first pregnancy and I’m still coming to grips with the changes to my body, my life, and my mind. But I’m sure of one thing: When the baby comes, I’ll have the time I need to get my bearings and bond with my little one — without worrying about going broke or losing my job. 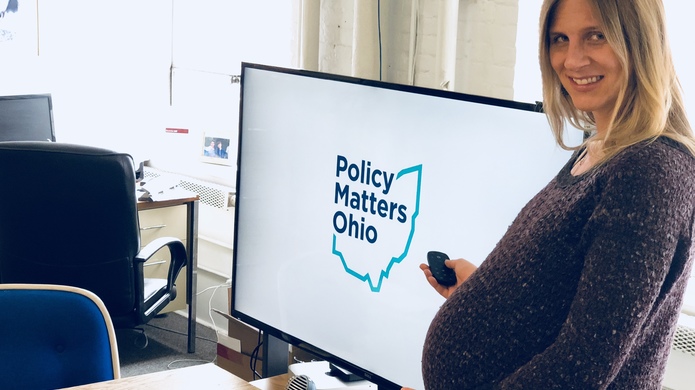 After Caitlin has her baby, she'll be able to stay home with him for the summer thanks to Policy Matters' paid leave policy.

At Policy Matters where I’m the communications director, we get six weeks paid leave and can use vacation and sick days for another six weeks. My husband’s company offers two weeks. We’re very fortunate. Only 13 percent of the nation’s private sector workers have any form of paid family leave, and only 4 percent of low-wage workers do. The documentary “Zero Weeks” tells heartbreaking stories of families struggling to get by without paid leave: a single mom who can’t afford take time off for chemotherapy; a husband frustrated by his employer’s inflexibility during his wife’s complicated pregnancy; and a brand-new mother scraping by without pay. I’ll be moderating a panel following a screening at the Cedar Lee Theatre in Cleveland Heights at 6:30 p.m. on April 26. I hope you can join me.

Only three countries — Papua New Guinea, Swaziland and the United States — don’t guarantee some form of paid leave for pregnancy and childbirth. The U.S. stands alone among wealthy nations. In 1993, President Bill Clinton signed the Family and Medical Leave Act which established certain workers’ right to take up to 12 weeks of unpaid leave for medical and family reasons. But in a state where the most-common jobs are also the lowest paying, many Ohio workers simply can’t afford to miss a paycheck.

Sixty-two percent of working people in Ohio don’t benefit from the federal leave law because it doesn’t cover them or they can’t go without pay. Nearly two-thirds of Ohio households rely on women as the sole breadwinner, according to the Ohio Women’s Public Policy Network. Paid parental leave is especially important for families of color, who often face the greatest barriers to finding good jobs. Workplace discrimination, declines in unionization and being targeted by the criminal justice system all make it harder for Ohioans of color to find jobs, especially ones that offer paid leave. Eighty-five percent of Black moms and 62 percent of Latina moms are their households’ only providers. A majority of white mothers – 53 percent – are the sole earners.

President Trump’s daughter and advisor Ivanka Trump made paid family leave one of her signature causes. The plan she’s crafting with Sen. Marco Rubio (R-Fla) might require people to draw from their social security benefits to cover the cost of taking time off – pitting retirement security against family leave: a choice many families simply can’t afford to make.

Paid leave pays off for employers and families alike. After California passed its law, mothers were 6 percent more likely to be back at work one year after birth, according to one study. Nearly 90 percent of California businesses said offering paid leave didn’t increase their costs and 9 percent said the program helped them save money by reducing turnover and/or their own benefit costs, according to Innovation Ohio. Families with access to paid leave are less likely to need public assistance. Paid leave also makes babies and mothers healthier and stronger, which is especially important in a state with one of highest infant mortality rates in the country.

Ohio needs a paid leave law and State Reps. Janine Boyd (D-Cleveland Heights) and Kristin Boggs (D-Columbus) and State Sen. Charleta Tavares (D-Columbus) are working to get us one. They proposed legislation to create the Ohio Family and Medical Leave Insurance Program. The program would enable workers to earn paid leave by contributing to a fund through paycheck deductions. All employees would be automatically enrolled and would begin earning into the system after they’ve been working for a year. During their leave, they’d earn a weekly wage based on a state-wide average and a sliding income scale. While employers could choose to contribute this modest expense themselves instead of covering it through paycheck deductions, they would not be required to do so. This system will not cost employers or the public sector anything beyond tiny costs to run the program. But when employees’ families need them – to give birth, to care for a newborn, to spend a parents’ final weeks at their side – they would be covered for up to 12 weeks a year. (Check out the Ohio Women’s Public Policy Network’s advocacy toolkit for ways you can help promote the legislation.)

From what I’m told, the first few months of my baby’s life will be a whirlwind of doctor’s appointments, sleepless nights and visits from family and friends. Having time off means I will get to experience all of it. My baby, family and I will be better for it. I’m a privileged woman. I work for an organization that values its employees. I’m white and I’m financially secure. The sad thing is, the families who would benefit the most from paid leave are the least likely to have access to it. And that has to change.