This Sunday is Mother’s Day: the day we pay homage to the backbone of many families with homemade cards, hand-picked dandelions, and maybe even burnt pancakes served by a proud six-year-old! Sure, being a mom is full of messy joy, but the lack of policy to support parents can make motherhood an uphill battle. With smart reforms, we can make life easier for moms: a gift we all can get behind. 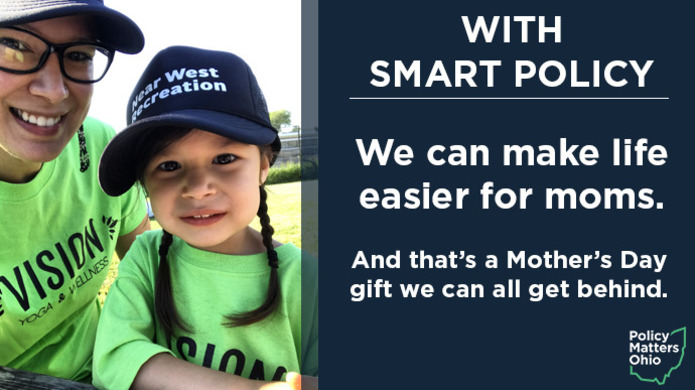 1. Paid time off for family and emergencies

In the United States, only 13 percent of the private sector workforce, and 4 percent of low-wage workers have access to paid family leave. Many mothers return to work shortly after giving birth so they don’t lose their job and fall into financial crisis. Paid leave means increased bonding time, improved postpartum recovery, and more. It can also help moms (and others) caring for an aging parent, or recovering from an accident or diagnosis of their own.

A recent Demos study found household income drops by 14 percent when two-parent households have children under age 5. It’s even worse for single mothers. Once children reach kindergarten, family incomes rise and poverty rates fall. This is no coincidence. In Ohio, families of three earning more than $26,117 are not eligible for help with childcare costs. Supporting childcare and public pre-K improves children’s educational outcomes into the elementary grades, and quality programs with wraparound care allow mothers to work and take higher paying positions without fear of losing eligibility.

More than 1.4 million Ohioans in nearly 700,000 households rely on federal food assistance to get by, and 40 percent of those benefitting from Supplemental Nutrition Assistance Program (SNAP) are children. In fact, most of Ohio’s most-common jobs pay wages so low that a family of three could not pay for housing, childcare, and other essentials, while still affording the cost of groceries. The current iteration of the destructive federal Farm Bill would cut SNAP by $17 billion over 10 years. Instead we should fully fund food aid, helping mothers provide the basics so we have fewer hungry children.

Across Ohio, wages have stagnated, despite increased worker productivity and falling unemployment rates. Seventy-two percent of Ohio mothers work, and women are more likely to work in low-wage jobs. Raising the minimum wage to $15 an hour by 2025 means those working mothers will have a much-needed boost in their income.

Despite some progress, Ohio men still earn more than women. Women’s wages have plateaued since 2000. Occupational choice alone does not explain the gap. In every single one of the top 20 female-dominated professions, men earn more than women, both in Ohio and nationally. In Ohio, two-thirds of households are run by single moms. Supporting equal pay means mothers can better provide for their families.

Every mother wants her child to excel in school, and every district should have the resources it needs. Still, Ohio policymakers have consistently underfunded public K-12 education. Support for K-12 public schools means more mothers can send their children to safe, high-quality schools, no matter where they live.

9. Help moms earn their way out of poverty

In Ohio, the Federal Earned Income Tax Credit (EITC) alone helped more than 265,000 people earn their way out of poverty in 2016. Yet, the existing state credit does little to leverage the positive effects of the federal EITC. A refundable state EITC would help keep mothers earning between $21,000 and $39,000 from falling below the poverty line.

The federal government funds essentials for mothers and children in all 88 Ohio counties. Policy Matters’ interactive map shows how the GOP tax plan passed last year could lead to cuts for programs like Medicaid, children’s health insurance, childcare, pre-k, food, and more. Moms need a tax system that makes sure there are enough resources to invest in the programs they need and doesn’t spend trillions on giveaways for the wealthy and powerful.