Like the rest of the 2017 federal tax plan, the Opportunity Zone program will reduce taxes for wealthy people – but if done right, it could spark the revitalization of some of Ohio’s distressed communities.

Under the program, tax incentives are offered to spur investment in “Opportunity Zones” in designated low-income communities—if all goes according to plan. The up-front cost is $7.7 billion over four years. By the end of the 10-year program, payment of some deferred taxes is expected to bring the cost down to about $1.6 billion.

But what if things don’t go according to plan? The Opportunity Zone program will constitute a tax giveaway described by Forbes magazine as “one of the biggest…in American history, all in service of gentrifying neighborhoods and expelling local residents.”

A new report by Wendy Patton and Michael Leonard digs into the details of the program. Here’s the short version: States have designated “Opportunity Zones” in one-quarter of their low-income census tracts. (Ohio has selected 320 of them.) Investors get big tax breaks to invest their capital gains earnings in new businesses and properties in those Opportunity Zones. The longer the investment, the greater the tax benefits.

The program has potential. Business could get a quick infusion of cash, plus sustained investment as they grow and hire. Neighborhoods and communities could see rising property values with new real estate and commerce, like grocery stores and pharmacies. Cities and states could get additional revenue from increased business activity and development.

The challenge is making sure the program doesn’t hurt the people it’s meant to help. The federal law encouraged states to establish Opportunity Zones in places where developers are already investing—like Ohio City in Cleveland, The Ohio State University area in Columbus and Over-the-Rhine in Cincinnati. In these neighborhoods, it will be a challenge to ensure that residents are not priced out of their homes and are hired for the jobs that are created. It’s only possible with strict accountability and reporting standards, community advisory boards and community benefits agreements with teeth. 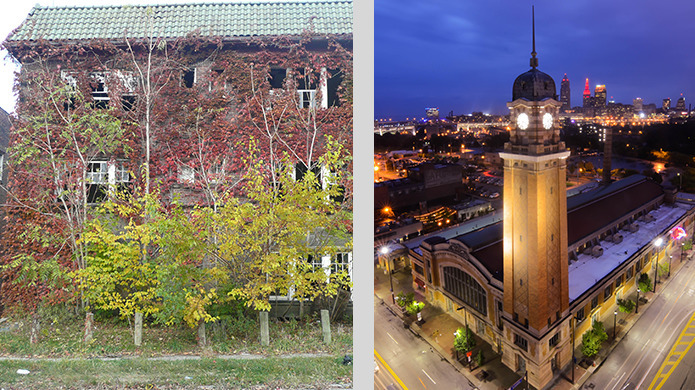 Each Opportunity Zone should have a community oversight body and agreements with investors to ensure opportunity is shared with residents. For example, if a new business is established that is related to an anchor institution like a university or hospital, there should be local hiring and career ladder program. If the development creates housing, a percentage should be affordable and available to residents. Residents should have access to cheap capital to buy and rehab homes.

The federal government has yet to publish final rules for investment in the zones. Rules should include reporting requirements that allow local control over outcomes. The feds should also provide states with funding to use the reported data for evaluation of the social impact of Opportunity Zone investments.

The state has to change its behavior too. If this does lead to increased revenue, lawmakers should not be permitted to squander them on more tax breaks and tax cuts. The state has a habit of pre-empting local authority. That has to be restrained, so cities can establish community benefit agreements to make sure these zones really help our neighborhoods. Local governments also have to work closely with community oversight bodies and support community benefit agreements with policy, investment and enforcement.

Policymakers need to protect the residents left out of Opportunity Zones—like those in East Cleveland, Ohio’s poorest city. Funding to pay for the federal tax bill’s tax cuts and tax incentives for the wealthiest will likely come at the expense of effective programs like Medicaid and food aid. Low-wage workers who need these programs may end up worse off.

The Opportunity Zone program presents as many challenges as it does opportunities. It will take hard work from all of us – policymakers, companies and citizens - to make sure the program actually gives our struggling neighbors a chance at better lives.

We better roll up our sleeves.