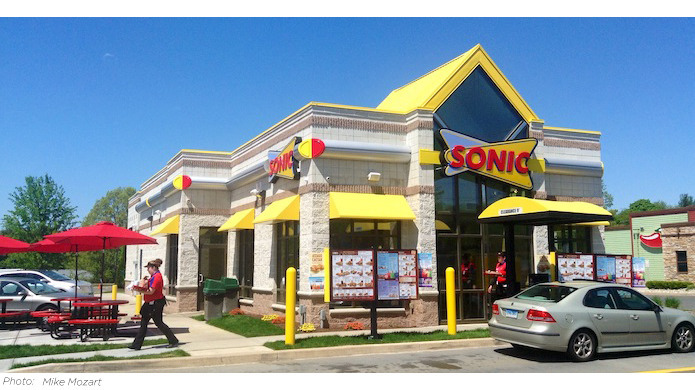 Workers at Sonic Drive-In locations in Lancaster, Circleville and Grove City walked off the job last week. According to reports, the walkout was in response to policy changes initiated by the new corporate affiliated franchise owner, SRI Operating Company. The new owners allegedly fired managers, some with more than seven years of experience on the job and cut some workers’ pay to about $4 an hour, the Ohio sub-minimum wage for workers who customarily receive tips.

In an updated statement sent to the Scioto Post about a week after the walkouts, Sonic stated, “[n]o wage rates at any level decreased as a result of this transition and Carhops may continue to receive tips above their hourly wages.” It is not clear whether the workers were misinformed about their pay or if their actions forced a policy change.

Either way, the workers’ action and the notes they left have made “Thank U, Next” the new “Take this Job and Shove It.” Their employer’s alleged behavior points to abuses in the fast-food service sector economy that policymakers and those charged with enforcing Ohio’s wage and hour laws should not ignore.

Fast-food and other quick-serve restaurant workers are the largest single occupational group in the state. More than 158,000 Ohioans work in food prep and serve jobs. Despite soothsayer pronouncements about the coming automation crisis or claims of a deepening skill crisis as more jobs purportedly require more skills, data show fast-food prep and serve jobs will remain the single largest job category in Ohio through 2026. If we want to address poverty, reduce the number of families that need food assistance or Medicaid, or ensure people are not trapped in dehumanizing jobs, then we must care about what happens to the Sonic workers and other workers in the service economy. These jobs must start to matter.

Wages for fast-food workers are among the lowest in the state. A typical worker in this field working full-time, year-round earns just 94 percent of poverty for a family of three. Low wages are just part of the problem. These workers are frequently subject to unpredictable scheduling that makes budgeting, childcare, education – and life – difficult. Workers earning at or near the minimum wage are also likely to encounter wage theft. A recent report found that nearly 23 percent of Ohio’s minimum wage workers have experienced wage violations.

The allegations that the new corporate-affiliated owners moved to pay Sonic workers $4 an hour shows how complicated the tipped wage credit is in Ohio. Ohio employers can pay workers a minimum wage as low as $4.30 only when certain conditions are met. Although this lower wage is often referred to as the “tipped minimum wage,” the law actually refers to it as a “tip credit, by which an employer can count up to $4.30/hour in tips received by an employee towards an employee’s wage. Subject to Ohio law, an employer may pay a tipped worker a wage as low as $4.30/hour, if and only if:

Federal law also requires that the employer must inform the employee of its intent to pay the $4.30/hour wage and of its obligations to supplement the employee’s wages when they do not average out to the full minimum wage; and the employee must be allowed to keep all tips received, except for limited allowable tip pooling.

It is not unheard of for customers to tip Sonic carhops, but unless we’ve all suddenly started tipping workers when we pick up our drive-thru breakfast burrito, it seems like a stretch for the Sonic bosses to start paying workers less than the full Ohio minimum wage of $8.55. Even with the latest statement from the franchisor, the allegations raise red flags that should draw increased scrutiny.

In an email response to our questions about the situation, the wage and hour bureau of the Ohio Department of Commerce, which is responsible for investigating wage violations made the following statement:

"While we are aware of the issues that have been brought to light by recent media coverage, there have been no indications of violations within the jurisdiction of Ohio’s Wage and Hour Bureau. We will continue to monitor any of the reported facts and, should the need arise, we are prepared to act accordingly."

Unlike other states’ investigatory divisions that follow a model of strategic enforcement, Ohio’s wage and hour bureau is complaint-driven. That limits the overall effectiveness of the bureau. Many workers do not know how to navigate the agency system and many are likely to fear retaliation. Bureaus with larger budgets and staff or that have a more targeted approach follow a different model called strategic enforcement. These bureaus proactively investigate industrial sectors where wage theft is more prevalent. Some departments, like California’s, have built community-agency partnerships to collect unpaid wages, develop innovative enforcement and prevention strategies, identify industry wide practices, and broadly improve working conditions.

Ohio currently employs five investigators and one supervisor who are tasked with the near impossible job of investigating wage and hour and prevailing wage law violations for the entire state. That is approximately one investigator for every 961,167 people in the labor force. This department runs on an annual budget of just over $1 million a year and operates on outdated legacy software systems. The bureau needs resources and a shift in strategy to better respond to today’s complex economy where traditional worker and employer relationships are blurred by franchising, third-party management, software and app-based employment, and the decline of unions.

Too many jobs in Ohio extract labor without affording any dignity to workers in return. Ohio is making it easier for unscrupulous bosses to skirt the law. The last general assembly passed a bill to shield corporate franchisors/owners from wage and hour liability of their franchise holders. Doubling the wage and hour budget to at least $2.2 million a year, engaging in strategic enforcement, and holding those who violate the law responsible should be a priority of state policymakers. If not, the electorate may join the Sonic workers in saying: Thank U, Next.