It’s Halloween, the spookiest day of the year. At Policy Matters, we’re less afraid of things that go bump in the night than we are about some of the policies our state lawmakers want to get passed. Here’s a list of a few that haunt our dreams. 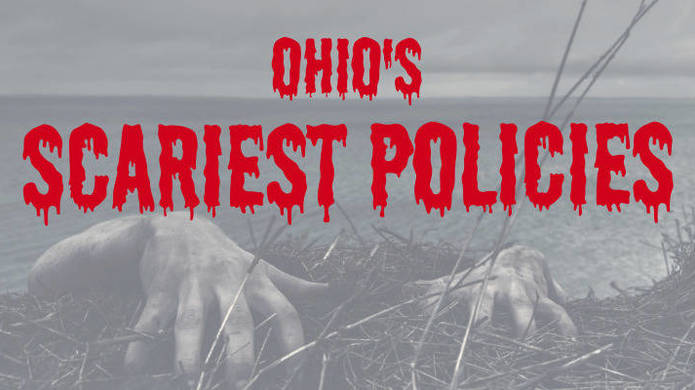 Medicaid is Ohio’s largest health insurer – covering about 3 million people, including 1.23 million kids. Forty percent of working-age adults covered by Medicaid work fulltime, 21% work part time, 22% are ill or disabled and 12% take care of a family member. People covered by Medicaid have low incomes, and many of the jobs they hold have erratic schedules and frequent layoffs. Many of the people who don’t work simply can’t. Ohio received federal approval to force Medicaid recipients to work 80 hours a month – or jump through more hoops to show why they can’t work. A similar proposal cost thousands of people their health care in Arkansas. The requirements are set to begin in 2021, so there is still time to urge the DeWine Administration to kill this misguided proposal.

2. Folks who don’t need it could get another costly tax break:

State tax breaks will grow to nearly $10 billion a year by 2021. Like vampires’ bottomless appetite for blood, the wealthy and special interests can’t get enough of our tax dollars. Senate Bill 39 would give state tax breaks to developers of “transformational mixed-use development” mega-deals that will cost over $50 million to build. There aren’t a lot of guardrails in the legislation, Wendy Patton pointed out. With the Tax Expenditure Review Committee still in limbo, we shudder at the thought of asking Ohioans to pay for another giant tax break. The bill passed the Senate, tell your state representative to vote no.

It’s frightening to think that Ohioans might not be getting enough to eat. Sadly about 14 percent of Ohioans can’t be sure where their next meal is coming from. Senate Bill 165 could make it even worse. The bill would require that the debit cards used by Ohioans to access federal food aid include a color photograph of at least one adult member of the household. This has been tried in other states and has not helped prevent fraud – which is extremely rare to begin with. Instead, Will Petrik testified, it will drive up administrative costs and could prevent people from getting enough to eat. The Senate Government and Agency Review Committee just held the fifth hearing on the bill, so tell your senator to vote no.

Just when we think legislation to weaken protections against unscrupulous debt settlement companies has been laid to rest, lawmakers bring it back from the dead. The for-profit debt settlement industry aggressively markets to consumers saddled with debt, desperately seeking help and financial relief. In many cases, these plans leave consumers in worse shape than before they involved the adjuster. Kalitha Williams has been fighting back against this ghoulish legislation for years. It’s reanimated in the form of House Bill 131 and Senate Bill 112. The bills are making their way through both chambers so call your state rep and senator.

5. Out of work Ohioans might lose their unemployment benefits:

The Trump Administration has released its share of terrifying policies, including their rule encouraging states to expand drug testing for people seeking unemployment compensation. Ohio lawmakers have taken Trump up on the offer with SB 207. This law is unnecessary, expensive and unfairly stigmatizes people who simply need help getting by after losing their jobs. It’s another one of those zombie bills that shambles around the statehouse, even after we thought we killed it for good. It’s in the Senate General Government and Agency Review, so tell your senator if it makes it to the floor, vote no.

6. We all could lose important free-speech protections:

The American Legislative Exchange Council peddles petrifying legislation from state to state. Senate Bill 33 is one of their poison pills aimed at stifling protest. The bill would make it a first degree misdemeanor to “knowingly enter or remain on a critical infrastructure facility,” which includes things like pipeline rights of way – even when they are on public lands. People found guilty of first degree misdemeanors could pay a $1,000 fine and face up to six months in jail. Authorities could charge people who “knowingly destroy or improperly tamper with a critical infrastructure facility” with a third-degree felony which carries up to three years in prison and a $10,000 fine. The bill already passed the senate, so tell your state rep to vote it down.

7. Innocent people could get shot:

It’s hard to come up with a funny Halloween reference here, because this bill is just so straight up horrifying. “Stand Your Ground” laws remove the “duty to retreat” when someone feels threatened. Under the new law – House Bill 381 – if someone fears for their life – they don’t have to take other steps to protect themselves before they use deadly force. In a state and country with such entrenched racism, and so many people unwilling to confront their own personal bias, Stand Your Ground laws present a grave danger to people of color. Governor Kasich vetoed the last attempt to pass Stand Your Ground in Ohio. Reps. Candice Keller and Ron Hood recently re-introduced the legislation in the House. Tell your reps absolutely not.