Posted on 11/26/19 by Kalitha Williams in Economic Development

Last month, I served as a panelist for a local public affairs television program. I was invited to talk about “Race in the Heartland,” a report our organization co-released with Economic Policy Institute, COWS of Wisconsin, University of Iowa and Iowa Policy Project. The report chronicles racial disparities in the 12 Midwestern states, including Ohio. Some public policies have helped break down barriers to well-being and prosperity for Black Midwesterners. But for the most part, the report shows that public policies have allowed white Midwesterners to accrue compounding advantages and pass them on to their children at the expense African Americans.

During the show, one of the panelists said the key to fixing the Midwest’s racial divide was increasing cultural awareness. We can all benefit from spending time with people that are of different races, faiths and values; but that won’t undo years and years of racist policies. Interacting with diverse people can build our understanding and get at the heart of the implicit bias we all have. But this process takes time. In the face of blatant racism, we can’t wait for our better angels to emerge. Public policy can be an immediate response or course-correction to injustices we see in our society.

The Industrial Revolution drew Black people out of the South in search of economic opportunity. The Midwest offered high-paying, unionized manufacturing jobs -- a stark contrast to the Jim Crow dominated sharecropping economy many left behind. This economic boom paved the way for the Black middle class and began to chip away at the disparities between Black and white people.

Despite the important gains, interests that profited from racist policies and practices pushed back. They attacked unions, progressive taxation, public education and programs that make sure everyone has the basics like food and health care. The consequences have been dire for Black people in Ohio. Strong public policies are critical to putting us on a path to eliminating racial inequity.

Education has been identified as an important element in generational economic mobility. Some have called it the “great equalizer.” Unfortunately, Ohio’s public education system treats Black and white students unequally. The Ohio Supreme Court has ruled four times that Ohio’s over reliance on property taxes to fund our public system is unconstitutional. Due to decades of redlining, segregation and lack of public and private investment, Black communities often have lower property values that contribute to a low tax base to support their neighborhood district. Proper, equitable funding is critical to providing quality education to all Ohio children. The lack of it may, at least partly, explain why the state’s Black students scored 41 points lower than their counterparts on the National Assessment of Education Progress eighth-grade assessment of proficiency in math. To tear down the barriers that hold Black students back, the state of Ohio needs to increase public school funding and make sure it goes to communities that need it. 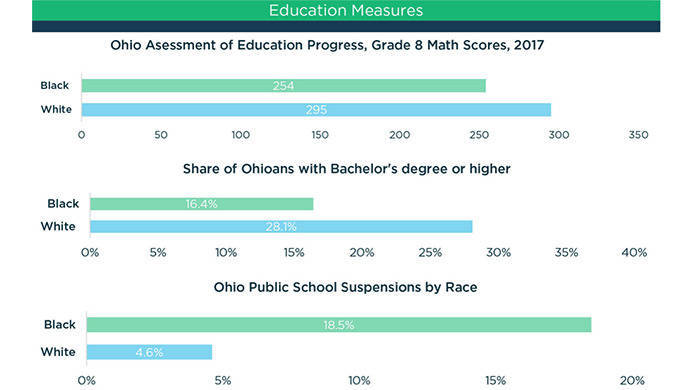 Despite record economic productivity, the gains aren’t being distributed evenly. Unionization or collective bargaining was important in decreasing racial disparities in the workplace. Declines in manufacturing jobs, which tend to be unionized, have eroded the income and economic well-being of Black Ohioans. Ohio has the 9thlargest racial wage gap in the nation. According to the United States Census, median Black Ohioan household income is $27,466 lower than white Ohio households. That gap has increased by nearly 6% since 2007. Employers are more likely to steal wages from Black workers by not paying them all they are owed. Policy Matters estimates that from 2013 to 2015, Ohio employers stole from over 35,000 Black workers.

Black unemployment tends to be higher than white unemployment in any state, but Ohio has the 5thlargest employment-to-population racial gap in the nation. Unemployment not only harms workers’ ability to support themselves and their households, it also has physical and psychological consequences on the workers themselves, their families and their communities. 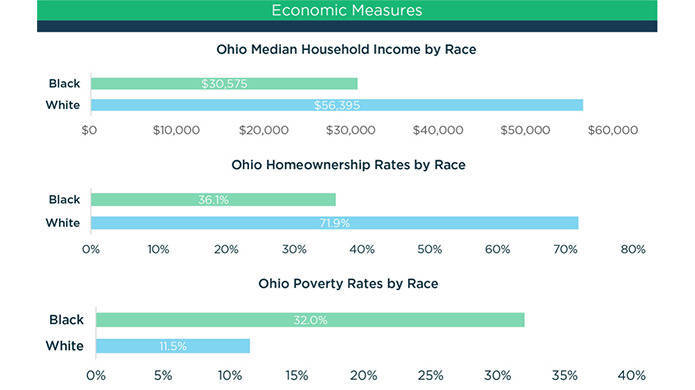 Public policies and business practices systematically deny Black people opportunities to build wealth and financial security. When lawmakers created Social Security benefits in the 1930s, they deliberately excluded domestic workers (day workers), almost all of whom were Black women. Black veterans were seldom able to take advantage of the benefits of the GI Bill, which helped build the white middle class after World War II. Banks refused credit to people of color, or charged significantly higher rates than they did for white people.

While policymakers in the late 1960s and 1970s passed laws that tried to dismantle discriminatory financial exploitation, new practices have emerged that require strong regulation as well. It was not until after the Great Recession of 2008-9, that we realized just how deliberately mortgage lenders targeted Black borrowers with subprime loans, regardless of their credit history. The foreclosure crisis that ensued caused Black families to lose billions of dollars in wealth, that likely will never be recovered. Financial institutions continue to prey on Black people with predatory financial products like payday loans and high-fee prepaid debit cards. Last year, Congress voted to allow car lenders and dealers to charge Blacks higher interests for auto loans. Research has shown that auto insurance companies engage in “redlining,” by charging higher rates to customers who live in ZIP codes where the majority of residents are Black. Earlier this year, Prosperity Now reported that income poverty among Black Ohioans is nearly triple that of white Ohioans. More needs to be done to protect Black consumers from new schemes and business practices meant to strip their ability to build wealth.

Decades ago, political leaders and policymakers made important efforts to mitigate the effects of racism by expanding voting rights, protecting the right to bargain collectively, striking down segregation in public schools and protecting homebuyers against discrimination.

No amount of cross cultural understanding could have achieved what these and other policies accomplished. Diversity initiatives will only go so far in a hostile public policy environment. As new challenges surface, we need a renewed commitment to address racial inequity. We have to be intentional and diligent in advancing change we want to see. Using a racial equity lens in all areas of society will help us identify and uproot institutional discrimination and implement public policies that prevent it in the future.

Kalitha Williams is the Project Director of Asset Building at Policy Matters Ohio and serves on the board of the Consumer Federation of America. This article originally ran in the November 2019 edition of the Columbus African American News Journal.

Celebrate Juneteenth by continuing to fight for racial justice
June 19, 2019
Racism in our wallets
December 20, 2016