As a senior in college, it’s hard not to feel anxious about the future. When I graduate this spring, I’ll be entering a dismal job market in the midst of the largest recession since the Great Depression, thanks to the COVID-19 pandemic (and the poor response of some of our leaders).

As of July, over 16 million Americans – or 10.2% of the workforce – are unemployed. Though unemployment is down from the peak of 14.7% in March 2020, the highest rate since the Great Depression, it is still a serious issue. Young adults are disproportionately affected: one in four 16- to 24-year-olds was unemployed in May 2020, nearly double the unemployment rate of 25- to 34-year-olds.

Meanwhile, the climate crisis also looms over my generation’s collective consciousness. The decade between 2010 and 2019 was the hottest ever recorded and 2020 is set to be the first or second hottest year on record. Hurricane Maria in Puerto Rico, the Camp Fire in California and the recent Australian bushfires offered alarming previews of what “business as usual” has in store. Ohioans are feeling the effects close to home as well – consider last year’s polar vortex, severe storms and extensive spring flooding in the Midwest. Just last week, the US experienced severe climate events on both coasts between the Apple Fire and Hurricane Isaias. Severe weather events have been linked to climate change and pose an enormous economic risk to our country.

The good news is we can tackle these problems together to create a comprehensive, long-lasting solution. We can employ millions of Americans restoring habitats, mitigating climate change, and protecting our natural resources.

In fact, the framework for such a program already exists. During the Great Depression, President Roosevelt established the Civilian Conservation Corps under the New Deal, putting nearly 3 million 18-25-year-old men to work building roads, creating parks, and planting trees on our public lands. The program fostered a sense of community and left a lasting impact for future generations. Roosevelt’s “Tree Army” planted over 3 billion trees on public lands, contributing to over half of all reforestation in US history, and built trails and shelters in over 800 parks across the US. 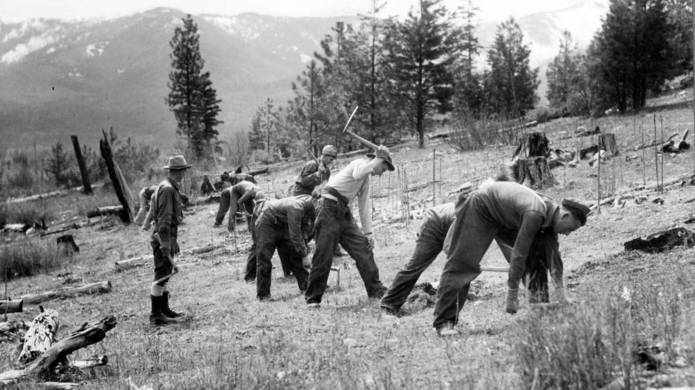 The CCC is not without its criticisms, however. For starters, women were not allowed to join. The program primarily served men on government assistance, and also employed WWI army veterans and some 88,000 Native Americans living on reservations. Although the CCC provided jobs to Black men, they lived and worked in separate camps.

A 21st Century Civilian Conservation Corps would address pandemic-related unemployment and the looming climate crisis by putting people to work in wetland restoration, reforestation, sustainable infrastructure, and more. A modern CCC should prioritize those most affected by the pandemic and most vulnerable to the harmful effects of climate change. Black and Brown people should be given priority to enroll, followed by others from poor and rural communities. People of color have long been victims of environmental racism, experiencing a disproportionate share of health hazards due to policies, such as redlining and highway segregation practices, that make it far more likely for them to live in close proximity to sources of toxic pollution and waste. Data from the CDC show that systemic poverty in Black and Hispanic/Latino communities make these people more susceptible and likely to die from COVID-19 than their white counterparts, across all age groups.

The Civilian Conservation Corps is especially important to Ohio, given the state is the nation’s sixth largest emission producer and generates large portions of its energy from coal. A modern CCC program is one of the recommendations in the recently released ReImagine Appalachia framework. ReImagine Appalachia is a coalition of 60 organizations across four states: Ohio, Pennsylvania, West Virginia and Kentucky. Together, we are building a sustainable 21st century economy that includes everyone in the region, no exceptions. Our plan would revive the CCC to restore wetlands, plant native species, reforest the region, and remove invasive species. Ultimately, a modern CCC would support local farmers and workers and encourage sustainable practices to protect the land for years to come.

Several members of Congress have already called for a modern CCC, including Ohio Rep. Marcy Kaptur. Last year, she introduced the 21st Century Civilian Conservation Corps Act of 2019 to hire unemployed and underemployed US citizens for public works projects such as reforestation; prevention of forest fires, floods, and soil erosion; and construction and repair of National Park System trails. That bill is a good start, but it should be broadened to include people who aren't citizens, too. In May 2020, U.S. Sen. Ron Wyden (D-Oregon) introduced the 21st Century Conservation Corps for Our Health and Our Jobs Act which provides funding for wildfire prevention, reforestation, and resiliency efforts. The bill also supports the Land and Water Conservation Fund, with a focus on getting rural Americans back to work and supporting the outdoor industry.

People need good jobs with good benefits and we also need to address the climate crisis. These are messy problems, but history provides a solid framework – there's no need to reinvent the wheel. Using Roosevelt’s CCC program as a blueprint, we can address both challenges at once. In doing so, we must prioritize those who are most impacted by the pandemic and the climate crisis. So, let’s come together and call on our leaders to support Reimagine Appalachia’s plan to revive and modernize the CCC.