Happy Something Else Heritage Month!

Happy Something Else Heritage Month!

Posted on 11/24/20 by Cynthia Connolly in Democracy & Government 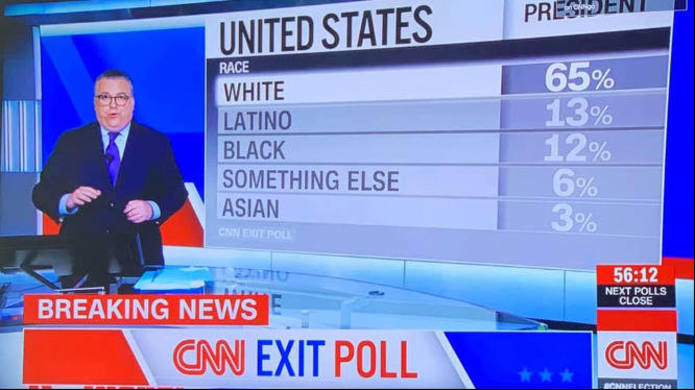 If you weren’t following Native Twitter or Facebook on election night, this screengrab of a CNN exit poll might have slipped past your newsfeed. Native Americans noticed, though, and we didn’t appreciate being labeled "something else.” What followed was the takeover of the hashtag #SomethingElse, fresh street t-shirts, and mountains of memes shared by Indigenous people across the country cracking jokes at their newfound label. 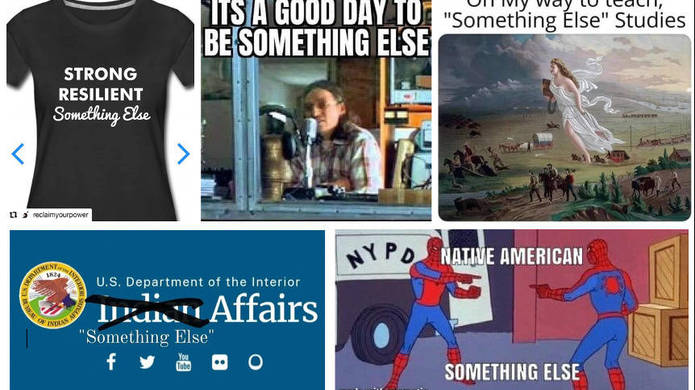 These viral memes reminded me that, once again, Native Americans are experts at facing adversity with humor. Yet, the “something else” label isn’t new. It’s just a more absurd way to say “other.” CNN’s election night gaffe particularly stings because the Native American vote has been influential in elections for decades. And this election, a record number of Native Americans ran for office. In addition, a new report called “Building Indigenous Power” surveyed over 6,400 Native individuals from across the country, representing 401 tribes and all 50 states. The report shows that Native Americans are highly civically engaged. In this country, policymakers have a history of relentlessly lumping Indigenous people into “other,” when collecting data. Not being properly counted contributes to the erasure of an entire people. This has harmful consequences.

Research has shown that two-thirds of Americans have never met a Native American person, yet they are surrounded by media, pop culture, and sports mascots that portray Native people in extremely limited and stereotypical ways. This lack of accurate representation erases Native Americans from modern times, and creates a bias. People were less likely to support Indigenous rights and social justice issues when they had zero perception of who we are today. This erasure and lack of modern visibility makes it difficult to address pressing issues such as the epidemic of missing and murdered Indigenous women, sacred lands threatened by oil pipelines, and COVID-19 outbreaks on tribal reservations.

The 2010 Census, a critically important data set that is used for community investment, development, and supports across government and industry, undercounted Native Americans on reservations by 4.9 percent—more than twice the next most undercounted group. The outlook for the 2020 Census is even more grim, with the Trump administration prematurely halting the Census during a global pandemic that disproportionately harms Indigenous communities. In May, the Navajo Nation had more COVID-19 cases per capita than any state in the U.S. At the same time, the CDC rejected tribal epidemiologists’ requests for raw COVID-19 data, claiming the data was nonpublic—yet the CDC freely offered the same data to the states. Without access to data, tribal leaders were left wringing their hands and unable to make sound decisions for their citizens.

Native Americans live in all 88 Ohio counties. While they count for a small share of the population relative to other groups, these are real people in our communities. Access to, and availability of data allows policymakers, researchers, and tribal leadership the chance to identify disparities in education, health, and treatment by the justice system. Yet, current reporting standards render Native Americans invisible in most of Ohio’s major institutions, including schools, hospitals and prisons.

Under current reporting standards for Ohio’s K-12 schools, Native American enrollment data gives little information. Of the 610 school districts in Ohio, nearly 60% fail to report a specific number of Native American students. The share of Native Americans among undergraduates in all of Ohio’s public universities and colleges is uniformly shown as “less than 1%,” as it has been for the past dozen years, since the Board of Regents started tracking diversity. People who are incarcerated are categorized as Black or white or “other,” despite research showing that Native Americans have a higher chance of being killed by law enforcement than any other race.

Easily accessible data for Native Americans in this country is not parsed out in meaningful ways to be helpful for analysis, if it’s parsed out at all. Our contributions are effectively erased, and it becomes unnecessarily difficult to identify and track our needs.

It’s time to decolonize our data. Native Americans are not just “something else.”

Cynthia Connolly is a citizen of the Little Traverse Bay Bands of Odawa Indians.