All children, no matter their race or where they come from, deserve a safe, stable, supportive home. Today, that’s not the reality for thousands of children in Ohio’s two-tiered foster care system.

In violation of federal law, Ohio provides far less financial support to a child in state custody who is placed with a relative or a close family friend — known as a kinship caregiver — than it gives to a child placed in a licensed foster care setting. For example, in Cuyahoga County a kinship caregiver receives $302 a month to care for one child while a licensed foster care provider receives a minimum of $624 and a maximum of $2,619 a month. This disproportionately harms Black children and families, who are overrepresented in kinship care settings.

Nearly four years ago, a federal court ruled in D.O. v. Glisson that children in state custody placed with approved kin caregivers have a right to the same payment rate as children in a licensed foster care setting. In November, after years of inaction by the state, advocates filed a lawsuit to compel Ohio to comply with the ruling. (We published our analysis and recommendations in this report.)

During the frantic lame-duck session at the end of 2020, state lawmakers responded by including an amendment to Senate Bill 310. Gov. DeWine signed the legislation into law along with an executive order to launch the Kinship Support Program by June. Amid the rushed process, kinship caregivers did not have an opportunity to weigh in on legislation that will directly impact the children in their care.

The new Kinship Support Program, like the existing system, is unfair and inequitable for children and kinship caregivers. The table below outlines how the legislation creates another two-tiered program where approved relative caregivers generally receive less financial support than licensed foster caregivers. 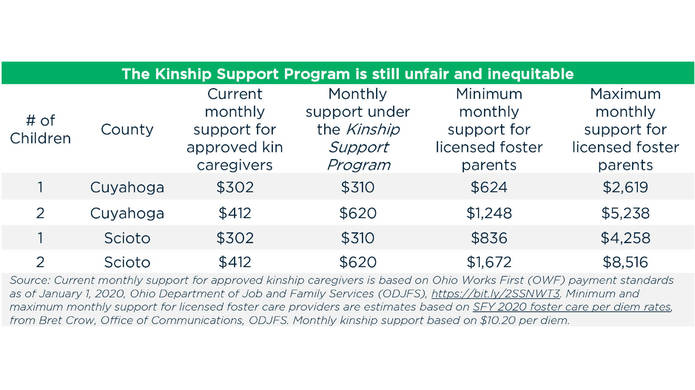 Questions remain about what happens to kinship families who can’t get licensed within six to nine months and what happens to families who don’t want to be licensed. If a grandmother is taking care of two grandchildren and she chooses not to become licensed as a foster parent, she will lose $208 a month after the time limit.

Attorney General Dave Yost, representing the Ohio Department of Job and Family Services and the state of Ohio, asked the judge to dismiss the federal lawsuit arguing the issue is now moot, because the new legislation “provides for the payments Plaintiffs have requested.”

Richard Dawahare, one of the attorneys involved in the Ohio lawsuit, said the new program is inadequate and won’t stop the lawsuit. Mr. Dawahare was the lead attorney in D.O. v. Glisson, which established that children in state custody placed with approved kinship caregivers have a right to the same public financial support as children placed with foster parents. He criticized the short-term nature of the program and said the new payments are still “a fraction” of what foster parents receive.

Kinship caregivers nurture and support children in their care the same way non-relative foster parents do but with fewer resources, less training, more stress, and limited preparation. Children placed with approved relative caregivers have a right to the same level of state support as children placed with foster parents. In the next state budget, Gov. DeWine and state lawmakers must allocate additional resources to provide these children and the friends or family who care for them the basic security and stability they deserve.