What if we honored all families?

What if we honored all families?

Amelia Robinson of the Columbus Dispatch points out that important facts are being left out of the public discussion about Ma’Khia Bryant’s death. Policy Matters Ohio agrees.

Here are some of the facts.

Ma’Khia was in foster care. Several stories have highlighted her hopes of being restored to her mother’s custody. We also know that anytime a child is separated from her parent(s), it is traumatic.

Ms. Hammonds ultimately lost custody of her grandchildren after being evicted from her home. At that point, the county children service agency separated Ma’Khia from her siblings and placed them in different foster care settings. Ma’Khia’s younger sister, Ja’Niah, remembered how they then moved through a half-dozen foster care settings. A New York Times article went into gruesome detail about these settings: One foster home was so strict that Ma’Khia was often not allowed to leave the house, one group home had dog feces on the floor, and one foster mother screamed at the top of her lungs.

One fact that’s been left out of the story is that Ohio has a two-tiered child welfare system. It’s two-tiered in two distinct ways.

First, Black children in Ohio are more likely to be removed from their parents and be involved in the child welfare system than white children. This is due to a long history of public policy choices that excluded Black people from housing, education and job opportunities, and a criminal justice system that disproportionately targets and separates Black families. Studies have also found racial bias among people who report children to child welfare agencies and among caseworkers who assess whether to remove a child from their home. The table below shows the over-representation of Black children in foster care and kinship care compared to the general population of Black children, as well as the under-representation of white children in foster care and kinship care in Ohio. 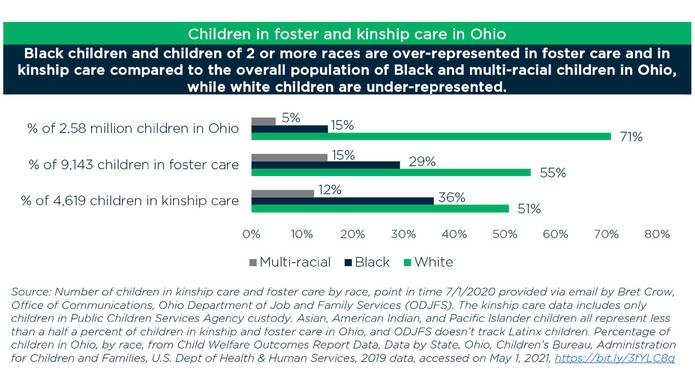 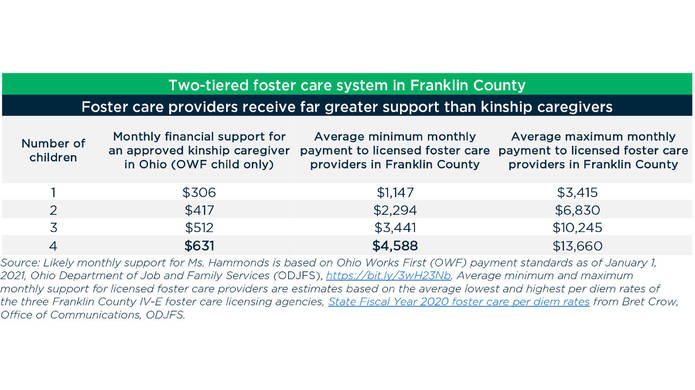 Ms. Hammond got a fraction of the support a licensed foster care provider receives. The New York Times reported that she began receiving $1,200 a month from the state after about six months of caring for her grandkids. She didn’t have the resources to pay for all the basics for herself and her four grandchildren. That prevented her from being able to pay the rent and cost Ms. Hammond her home and her grandkids. “They could’ve just given me what they give one foster parent, and then I could’ve gotten housing, taken care of the kids and done what I needed to do,” she said.

A federal court ruling in 2017 was supposed to compel the state of Ohio to do just that. In D.O. v. Glisson, the 6th Circuit Court found that children in state custody placed with approved kinship caregivers have a right to the same payment rate as children placed in a licensed foster care setting.

But Ms. Hammond didn’t get the support she and her grandkids needed and deserved because certain state lawmakers have refused to act. We must demand that state lawmakers provide kinship families the support they need to thrive. Ma’Khia could still be alive today if our state lawmakers truly honored and respected all children and families, regardless of race or place.

We have the power to make sure all kinship families thrive
February 18, 2021