Federal funding continues to be a lifeline

Federal funding continues to be a lifeline

Ohioans pulled together to make it through the worst of the pandemic over the past 18 months. When a crisis strikes, we count on the government for aid and protection. Despite deep political divisions, Congress acted, passing bill after bill to strengthen hospitals, help people meet their basic needs and support businesses. Federal aid remains critically important as the nation begins to build back.

In recent weeks Senators of both parties came together to create and pass the Infrastructure Investment and Jobs Act, a bill that would provide federal support to repair roads and bridges, expand broadband, replace lead water pipes and rebuild other public works systems that state and local governments often cannot afford on their own. Sen. Rob Portman, a Republican, led negotiations to pass the bill, which could bring Ohio $10 billion federal dollars. Sen. Brown, a Democrat, joined Portman to push this bill forward. They found common ground for the sake of making life better for the Ohioans they represent.

The federal infrastructure plan will make Ohio a safer, more vibrant place to live. Almost 5,000 miles of Ohio’s roads and streets badly need upgrades and repair. Traffic congestion costs Ohio motorists an estimated $4.7 billion each year in lost time and wasted fuel, according to the American Society of Civil Engineers (ASCE). The infrastructure bill would support needed repairs over the next five years, creating good construction jobs while reducing driving costs and improving commute times. Ohio is second in the nation for the number of bridges, with 44,736, nearly half of which are not in good condition. The Infrastructure Investment and Jobs Act includes $12.5 billion for repair and replacement of bridges nationwide, based on Sen. Portman’s Bridge Investment Act. It will provide funds for projects like the  Brent Spence Bridge Corridor Project in Ohio. 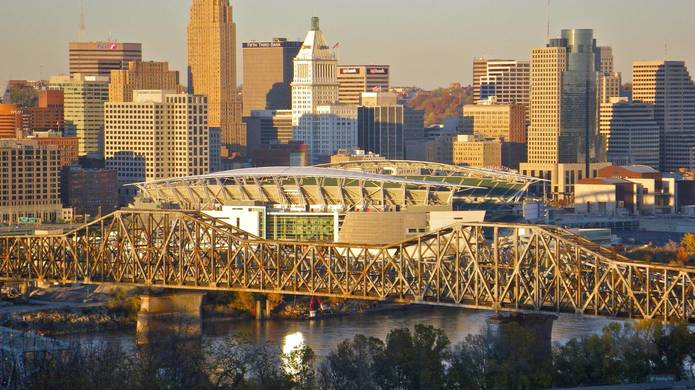 The legislation would also provide people with transportation options beyond driving by strengthening public transit. Public transportation is a lifeline to people who can’t afford a car, or can’t drive due to an illness or disability. It’s also an important way to curb climate damaging emissions from cars. In 2015, the Ohio Department of Transportation found the state’s public transit systems were 37 million rides short of market demand each year. The infrastructure bill would provide Ohio $1.2 billion over five years to improve public transportation, allowing transit authorities across the state to replace aging buses and rural places without public transit to provide services.

Funding from the infrastructure bill will give more Ohio kids a chance at a brighter future. Ohio has more old service lines loaded with poisonous lead delivering tap water than all but one state (Illinois), a terrible threat to far too may Ohioans. Lead poisoning causes many health problems, including developmental delays and lasting brain damage in children. The Infrastructure Investment and Jobs Act gives state lawmakers money they can use to replace lead service lines. It would also allocate funds to provide wireless services to the 259,000 Ohioans without access, allowing them to fully participate in education, health and other services. It would also help with the cost: over 3 million Ohioans live in households that would qualify for the “Affordability Connectivity Benefit” to help low-income families afford internet access.

The Infrastructure Investment and Jobs Act was not the only progress made this week. Even as this important bill passed, Senators also passed a budget resolution that would make health care more affordable, provide tuition-free pre-kindergarten and community college, ensure paid family leave and create direct jobs through a Civilian Climate Corps. Millions of immigrants would have a new chance for citizenship. The Senate’s budget would offer states financial incentives to adopt laws that better protect working people. By extending the child tax credit, the budget would expand opportunity for more kids and help their families make ends meet. These are just a few of the needed investments the proposed budget would address. Now, we must raise our voices to let our representatives in Congress know of our support of both measures.

As voters, we must always be vigilant in raising our voices for the public services we need - from clean water to healthy, safe neighborhoods, good schools, affordable college, public transportation, sound roads and bridges and all the services necessary to support our families and communities. In a democracy, that’s our job.