The legacy of Blair Mountain

The legacy of Blair Mountain

This week marks the centennial of the Battle of Blair Mountain, where some 10,000 Appalachian mine workers joined together across race in the largest labor uprising in U.S. history. For a week in 1921, mine workers in West Virginia’s Mingo County fought a pitched battle against mine owners, hired mercenaries, and sympathetic local police departments to demand their right to form a union. They helped spark a vibrant union movement secured through hard-won protections for workers in the New Deal. 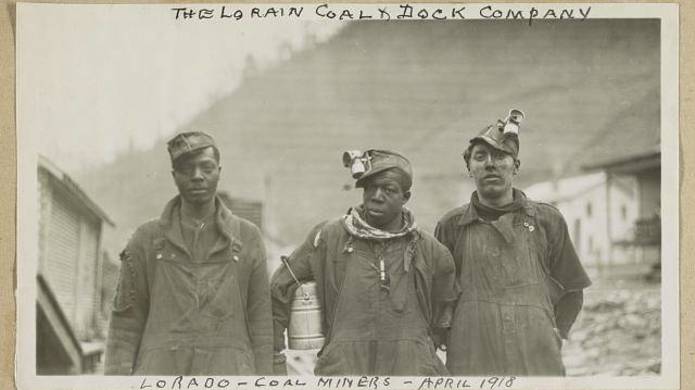 Miners in Logan Co., WVA. Courtesy of the U.S. Library of Congress

Miners did grueling work in dangerous conditions, often lying on their sides to hammer gaps into coal seams, where they would insert explosives, retreat to what they hoped was a safe distance, and return after the explosion to gather the coal. From 1890 to 1917, some 26,000 miners were killed on the job, and around 12,000 were injured at work each year. Many escaped or survived injuries only to succumb to black lung, which stole away years from their lives as they struggled to breathe into lungs coated with silica.

Coal companies exerted extreme control over mineworkers’ lives. Mine workers lived in company housing, which they and their families could abruptly lose if they were fired. Coal companies paid them in “scrip,” which could only be spent in company stores that charged exorbitant prices. They required miners to rent the tools they used, deducting the cost from miners’ pay. And they forced miners to sign “yellow dog” contracts asserting that they would not join a union, then used these as a basis to sue unions for attempting to organize.

Mine workers in some states had begun to successfully organize despite these tremendous challenges. The Ohio Miners’ Amalgamated Association formed in 1882. It would later merge into the National Federation of Mineworkers; which evolved in 1890, into the United Mine Workers; and by 1901, became the nation’s largest union, counting some 250,000 members. West Virginia mine owners held out against the 1897 Central Field Agreement, which raised wages and established industry norms in Ohio, Illinois, Indiana, and Pennsylvania.

When the United Mine Workers attempted to organize Mingo County, West Virginia in 1920, coal companies responded by forcibly evicting miners from their company owned homes who were sympathetic to the union. This led to the Matewan Massacre, in which Sheriff Sid Hatfield engaged hired union busters from Stone Mountain Coal Company over the evictions in a dispute that devolved into gunfire and left 10 dead. After company agents publicly murdered Sheriff Hatfield in retaliation, and a call to action from Mother Jones, some 10,000 miners, set out to march into Mingo to force local deputies to lift martial law put in place there that prevented their organizing. They never arrived. Instead, they met with fierce resistance from company-hired gunmen and local law enforcement. The battle escalated to the point where company men used private planes to drop poisonous gas and explosives on three coal towns. The involvement of federal troops eventually brought the conflict to a close on Sept. 2, 1921. 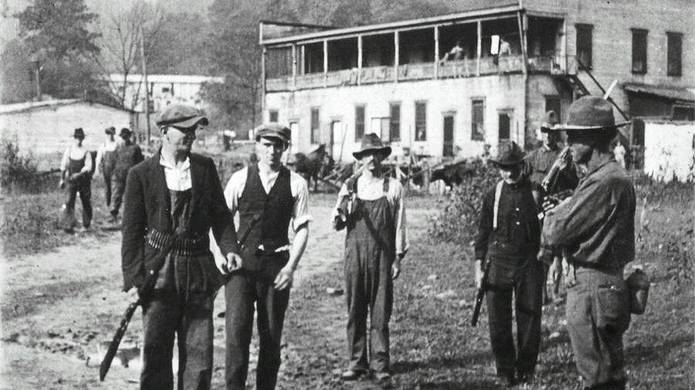 After the Battle of Blair Mountain in 1921 the union miners surrendered to the federal troops and gave them their weapons. Three miners with federal soldiers prepare to surrender weapons. Courtesy of libcom.org

In the immediate aftermath of Blair Mountain, miners were dealt a crushing defeat and failed to organize Mingo County or the West Virginia coalfields. Organizers were tried for treason, and though most were acquitted, the battles drained UMW coffers and membership fell in the short term. Yet in the long run, New Deal protections they fought for made it easier to form a union — although white people reaped more of the benefits. To pass some of the union protections, New Dealers cut deals with racist, wealthy interests in the South to exclude predominantly Black and brown farm and domestic workers. So, while Black mineworkers were covered, their counterparts in other industries were not. Still, Blair Mountain showed what could be possible when Black and white workers join together. It is now seen as a watershed moment in U.S. labor history.

While many company towns of the time were segregated, as were the jobs in the mines, strikes were far more racially integrated. The tent city miners created with their families after their forced removal from Matewan required all families to live together, no matter their race or nation of origin. Red Thompson, a Black mine worker, led a force of 75 men in the Battle of Blair Mountain. The growing solidarity between the miners and their families who were determined to secure their union and better working conditions for all on the job overcame the company’s attempts to pit worker-against-worker based on skin color. Miners distinguished themselves from the company men by tying red handkerchiefs around their necks; they would be known as the “red neck army.”

Blair Mountain and the Coal Wars are a reminder of how hard our forebears fought to overcome corporate control of their lives, despite deep racial and cultural antagonism. It stands as a cautionary story about how grim working people’s lives can become when corporations exert such total control. All people deserve a real voice in the economy—both in policy and on the job.

As the fossil fuel economy recedes in the face of resource depletion, climate change, and the advent of more efficient sustainable and competitive energy alternatives, working people in Appalachia today are charting their own course. The blueprint for a vibrant and inclusive new chapter for Appalachia is deep public investments in the community, leveraged to create inclusive high-quality jobs; a sustainable region with restored land and water, a modern grid and transportation system, and revitalized manufacturing; and rebuilding the middle class.

Blair Mountain also a reminder of the vital need for workers to band together in unions to assert their rights in dealings with powerful corporations. Besides securing better pay, unions protected mine workers against injuries and death. With corporate-backed policies that have chipped away at union power, those are on the rise again, along with black lung cases. After decades of corporate attacks on working people’s right to form a union, the Protecting the Right to Organize (PRO) Act now before Congress would make it easier for working people to form a union. Congress should pass the PRO Act, and state and local governments should use their purchasing power to require contractors adopt neutrality policies that respect workers’ right to join together in a union.

The most important way we can honor the Blair Mountain miners’ legacy today is to keep up the fight for union rights for all working people. All people, no matter their race, deserve a fair return on their work and dignity on the job.

Clean Slate for Worker Power: How labor law should work
June 18, 2020
Essential workers are working in a biohazard and need proper training
May 6, 2020