For years, almost no one was happy about how the state of Ohio funded public schools. The system pitted cities against each other and private and charter schools against public schools. We were living in the K-12 version of the “Hunger Games,” wherein victory hinged on the wealth of your district. The wealthier your district, the stronger your chances of success.

Most state lawmakers signed off on a system that relied too heavily on local property taxes, so communities where many residents have low incomes struggled to pay for the basics like updated resources and teaching materials. The state capped the funding it sent to some districts, often leaving those districts feeling cheated. In others, state funding failed to keep up with changing costs and student needs. Meanwhile, lawmakers diverted almost $1 billion dollars a year from local levies to private and charter schools.

Frustrated and ready for a change, people began to raise their voices. Under the leadership of State Senator Jon Patterson (D-Ashtabula) and Speaker Robert Cupp (R- Lima), parents, teachers, school officials and community leaders joined a three-year conversation to improve school funding in Ohio. Together, they developed the Fair School Funding Plan (FSFP) and worked hard to convince their lawmakers to pass it into law. They succeeded — Ohio lawmakers enacted it in the new state budget. If fully implemented, the FSFP will remedy many of the failures of the old system and make the funding scheme more equitable and constitutional.

While the FSFP is promising, lawmakers didn’t fully fund it and refused to commit to full funding over time. We won’t truly end the K-12 Hunger Games until our elected leaders can answer three critical questions: (1) Will this new plan — as enacted — be equitable? (2) Will the dramatic increase in state funding for private and charter schools in this budget endanger legislative commitment to public schools in the next? (3) What are the chances they will fund the FSFP in the future?

The issue of equity is the most urgent, because of a history of unequal resources in Ohio’s school system, which affects the lifelong opportunities of many Ohioans. Decades of residential segregation, redlining and predatory lending practices have stripped Black communities of wealth, causing high numbers of Black people to live in blighted neighborhoods with limited community resources. This disadvantages schools in these communities because they heavily rely on local property taxes. As a result, schools that serve high concentrations of Black students are also the schools which have received inadequate funding under the old system that was dependent on local taxes.

To understand how the new funding structure would — even in these first two years, with partial funding — expand opportunities for students often excluded and underserved, we examined how it would impact schools in communities of color. To our satisfaction, we found it would increase funding to districts with high concentrations of Black, Latinx, and other minority students, illustrated in Figure 1, and didn’t do so at the expense of less integrated districts, reminding us that we can all rise together. 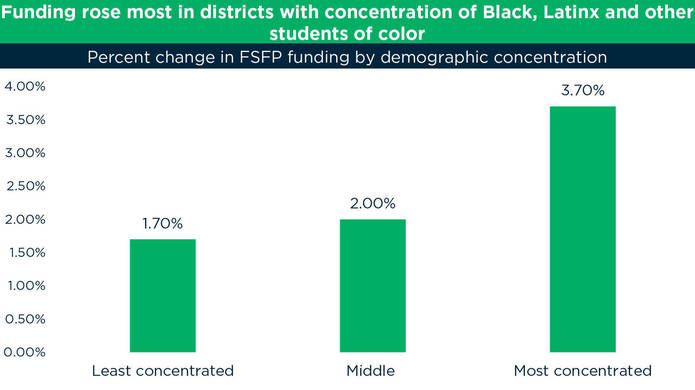 Source: Policy Matters Ohio based on data of the Ohio Legislative Service Commission.

The figure above shows that while all districts get additional funding under the FSFP, those schools with high concentrations of Black and brown students will receive the extra funds they need to develop targeted curricula, specialized supports and programming, and improve disciplinary systems.

This is a major win. However, some lawmakers slipped in the poison pill of privatization, adding hundreds of millions of state dollars in both direct funding and tax credits to subsidize families sending their children to private and charter schools. That’s an expensive choice, particularly when there is so little accountability in the private system. Still, it’s better than the old practice of funding charters (most of which were run by for-profit operators in 2020) and scholarships to private schools (“vouchers”) out of local district’s budgets. The FSFP put an end to that.

The danger is that in future years instead of living up to the promise of the FSFP, they’ll continue to weaken the public system by diverting increasing shares of public funding to private and for-profit entities. When education becomes a “commodity,” said Nobel Peace Prize winner and Indian social reformer Kailash Satyarthi, “[t]hose who can afford to buy it, buy it, and those who sell it make money out of it.” The potential threat of privatization of education in Ohio threatens our hope for a state where everyone can succeed no matter their race or their family’s income level.

The Fair School Funding Plan solves the inequitable and unconstitutional funding structure that we have had to endure. The efforts made by individuals, school boards, teachers, administrators, state agencies and lawmakers opens the door to great progress for Ohio’s kids and families. But the question of whether lawmakers will sustain it in future budgets remains.

Simply put, they must. With the FSFP fully phased in, schools in low-income districts with high numbers of Black, brown and economically disadvantaged students will be able to provide resources, update facilities, hire, train, and retain quality teachers from all backgrounds, provide access to and develop competencies in technology, and create alternative methods of school discipline – all of which is long overdue. The Fair School Funding Plan can create an excellent public school in every ZIP code, regardless of what the families and children look like and how much people are paid.

There’s work to be done to make sure lawmakers continue the promise into the next biennium and beyond. May the odds be ever in our favor.

This blog is the first in a series on school financing, the Fair School Funding Plan, and its impact on Ohio’s kids in schools. The ripple effects mentioned here will be explored in future blogs in this series. Stay informed Ohio.