Cleveland VOTES shows up for Cleveland

Cleveland VOTES shows up for Cleveland

Posted on 04/01/22 by Daniel Ortiz in Democracy & Government 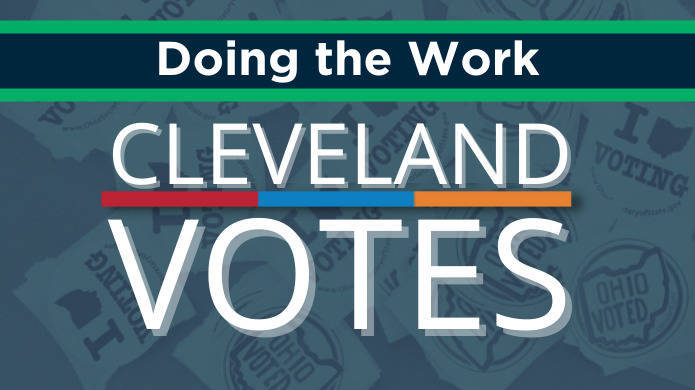 Strong communities show up for each other. For Cleveland VOTES cofounders Erika Anthony and Crystal Bryant, that’s what democracy really comes down to: everyday people showing up for their neighbors. They founded the organization in 2013 because they believe in bringing people together to have a say over the decisions that affect our communities so we can build trust in our government. I had the privilege of witnessing their mission up close last year when Policy Matters Ohio and Cleveland VOTES joined forces on a research project. Together we explored Clevelanders’ attitudes on democracy, power and the issues that matter most to high-potential voters.

What we learned further convinced me of the importance of Bryant and Anthony’s mission. The work of Cleveland VOTES is the cornerstone of liberty and the rights we enjoy. While we benefit from the fruits of that labor, the team at Cleveland VOTES is quick to remind us we need more helping hands to achieve a government and civic fabric that works for all the people.

The toplines of the polling memo illustrate that people are going through a crisis of faith in our government. Conversations in focus groups bolstered findings from the poll, showing that people care deeply about their communities, but struggle with confidence in local elected leaders to deliver on the issues they care about most. Many people don’t think local politicians care for them, and that is reflected in low voter turnout that causes many pundits and political strategists to wring their hands. What gets discussed less is how even among those who don’t see voting as useful, people are coming together to share information and lift each other up in community. We are witnessing a change of practice where civic muscles are being worked and getting stronger by the day.

In their Democracy in Review, Cleveland VOTES shouts out all the efforts of their partners, whose collaboration accomplished more than any one organization could. Over the years their staff has promoted voting across the city, explained the implications of the 2020 census and Ohio’s redistricting process, and answered questions on everything civic for multiple communities. In short, they offer technical assistance for democracy. You can learn more about the organizations and community leaders who have been activated in the #Commit To Cleveland toolkit. In 2021 they gave out $195,000 in grants to 30 organizations to educate, mobilize and build capacity across the city, gathering 2,265 registration cards on National Voter Registration Day. The guiding principle is beautifully captured in Erika’s City Club talk, where equitable democracy is described as harnessing the power of “all of us.”

Activating people in our democracy with an understanding of the role of government is more important than ever. There are many obstacles, but I remain hopeful. Dr. Bernice King recently said, “Hope sees truth and still believes in better; and is willing to strategize and work for it.” The dedication from the Cleveland VOTES team and the trust that so many have in the organization is real. They inspire hope for our city. Right now, Clevelanders are enjoying a resurgent democracy where each day we take steps toward transparency and equity: demanding that elected leaders are accountable to us, and transforming our processes so more of us have a say in our government. Join the team strategizing and working for change.

When Bryant and Anthony started Cleveland VOTES in 2013, their intention was to engage returning citizens about the importance of voting. During a City Club forum they sponsored on The Soul of Democracy, Desmond Meade distinguished between making a contribution and making a commitment: The latter requires one to be all in. Commitment from communities and institutions is key to building a brighter future for all of us, no exceptions. We are all in this together and we cannot afford to lose. With Erika formally taking on the role of executive director, I cannot wait to see how the team continues to show up. Cleveland VOTES is all in for democracy and I hope you will support by following them, making a contribution, and committing to make a difference.