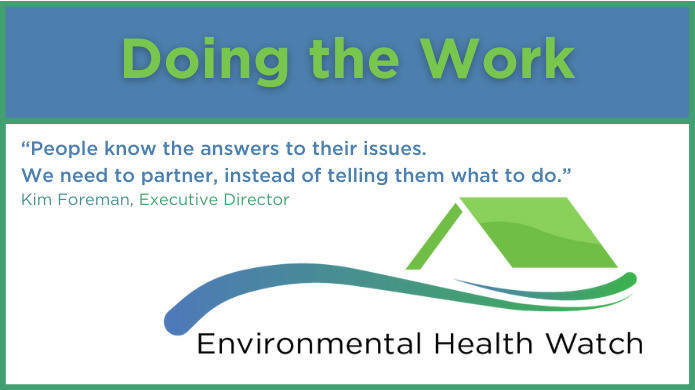 Years ago, Kim Foreman was in a meeting discussing the buzzword of the day: Sustainability. She looked around the room and realized all the people there were white. Kim, who worked for Cleveland-based Environmental Health Watch (EHW) thought to herself: Black people already know all about sustainability. “Our grandparents came up from the South and we had our own gardens.”

Today, Kim is EHW’s Executive Director, a post she has held since 2016. Her history with the organization goes back much further. Stu Greenberg founded EHW in 1980 as a volunteer effort to educate Clevelanders about the health implications of hazardous waste, chemicals and pollution. It became a 501c3 in 1983. Kim came on board part time in 1998 through AmeriCorps’ HealthCorps program while she was a student at Case Western University.

“I was a nontraditional student, meaning I lived some life, in my 30s with two kids,” Kim said.

She originally wanted to be a pediatrician, but as her kids got older, she worried about how the long hours and intense schooling would affect them. When Greenberg offered her a full-time job running the healthy home visiting project in 2001, she took it. Because of her life experience she could directly relate to the people whose homes she visited.

“The women I was meeting, they were like me,” she said. “They were single parents with children.”

Back then, Kim’s work was mostly technical. She would identify specific problems in each home and connect residents with resources to help fix them. House after house, problems like lead poisoning and asthma kept appearing. Kim realized her work would never end unless they could get to the root causes. That would require systems change.

EHW still does that important technical work with its home visiting programs, but over the years, and especially under Kim’s leadership, the organization’s scope has broadened to tackle pernicious systemic problems. EHW became the local lead for the massive national program BUILD HEALTH, designed to break structural barriers that disproportionately harm the health of Black and brown people. EHW gave direction to representatives from MetroHealth Hospital, University Hospitals, and the Cleveland Department of Health. The coalition launched a deep engagement effort to tap the knowledge and experiences of the Cleveland residents most harmed by systemic racism, substandard housing and inaccessible health services. They pushed the city to make more proactive lead inspections and enforce the rental registry to keep track of properties. They even developed the Cleveland.Housing.Health app so renters can look up properties to learn their violation history, if the property is registered, and potential health risks associated with older housing. Soon tenants will be able to see which properties have been lead safe certified.

In 2019, after years of community pressure, Cleveland City Council and Mayor Frank Jackson finally passed a lead safe ordinance. The city, hospitals, foundations and other community-based organizations formed the Lead Safe Cleveland Coalition to implement it. EHW oversees the coalition’s primary connection to the community, the Lead Safe Resource Center.

“We are the gateway into learning more about lead safety efforts in Cleveland,” said EHW Deputy Director Chantal Tademy. “We’re meant to be the front door for the community to connect and engage with our work and the Lead Safe Cleveland Coalition.”

Chantal says the resource center opens the front door in three main ways: a call center for landlord tenant engagement, community action for outreach and education, and workforce development training and resources for lead safe workers in the community. The center runs a hotline where operators might advise a tenant or help a landlord understand options for achieving lead safe certification, including applying for loans and grants, being trained and certified to complete lead safe remediation, and hiring contractors to make their property lead safe. The education and outreach team is staffed by people directly from the most affected communities and has a presence in every Cleveland ward and ZIP code. They talk about lead safety to everyone from social workers and child care workers to property owners and tenants. The workforce development program trains people to become lead clearance technicians and lead safe renovators so they can make a good living while making their communities safe. In less than two years, Chantal says over 450 people have participated in the certification training.

“We can see that the community, at all levels, is invested,” she said. “We see people care about creating lead safe Cleveland. We are seeing it happen every day and it is beautiful. 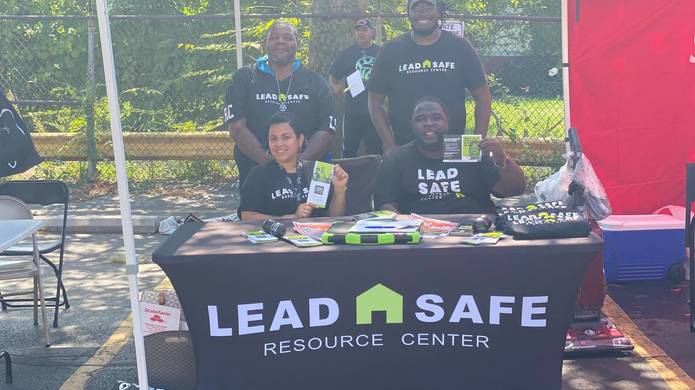 EHW’s approach is based always on “watching the community, hearing what the community is saying about their environment and their health and being responsive to it,” Chantal said. That means taking on a lot of work beyond lead safety. Years ago, EHW defeated a garbage incinerator and pushed the EPA to clean up an illegal dump site, which is today one of Cleveland’s most celebrated urban farms: Rid-All.

In 2019, Rid-All, in the heart of Cleveland’s “Forgotten Triangle” became the site for EHW’s “Fresh Fest.” EHW launched the festival in partnership with residents who wanted new ways to generate community wealth. Kim says most community events in Black neighborhoods are full of social service tables, but you won’t find those at Fresh Fest. Instead, the festival celebrates the community’s assets like locally grown food and local artists. In its first year, Fresh Fest drew 6,000 people. After a pause in 2020 for COVID, Fresh Fest returned last year with famed Salt n Peppa DJ Spinderella as headliner. Last year, approximately 7,000 people attended. EHW is clearly onto something. And maybe the secret to success is simpler than many organizations think.

“People know the answers to their issues,” Kim said. “We need to partner instead of flying in and trying to tell them what to do or what we think is good for them.”

EHW does some of the most important work in Northeast Ohio. Please consider supporting them with a donation!