Posted on 06/16/22 by Amanda Woodrum in Local Sustainability

Our homes should be our safe place, where we know we can keep ourselves and our loved ones free from harm. But throughout Ohio this week, people had to leave their homes to find relief from sweltering heat within. American Electric Power (AEP) chose to shut off electricity for a quarter of a million customers, many in neighborhoods where Black and brown residents and low-income families live, smack in the middle of a severe heat wave. Parts of the state may not have electricity for nearly a week. 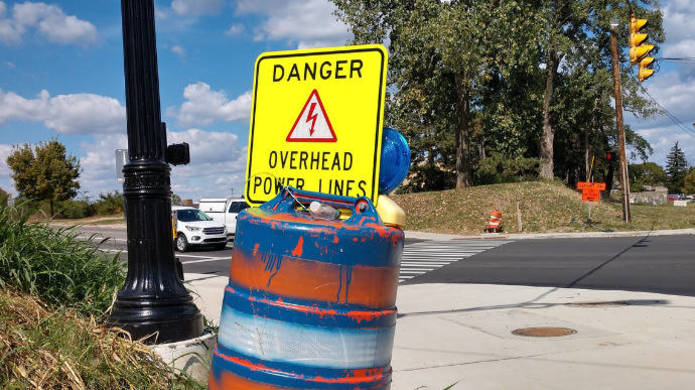 AEP says demographics have nothing to do with where they chose to shut off power. The corporation said recent storms and the heat forced it to turn off power in areas where the grid is older to prevent a more widespread problem. The Ohio Consumers’ Counsel has called for an investigation and the Columbus NAACP is calling for more transparency. And of course, AEP’s own statements beg the question: why is the electrical grid in low-income communities so old it needs to be shut down to prevent a widespread blackout, despite the fact it is clearly dangerous to the health of these residents to do so.

And the answer to that question points to a much deeper problem: Our nation’s grid is in desperate need of an upgrade. The big brown poles with their stringed-along black wires that deliver our electricity, internet, and phone service, are way past their prime. It’s time to bring the entire electricity sector into the 21st century by modernizing the grid.

We need a modern grid that doesn’t go down every time it rains hard or gets hot outside. We need a modern electrical system that doesn’t waste more energy than actually reaches the end user. For every three lumps of coal put into our current system, only the equivalent of one lump of usable energy comes out. In other words, roughly 70% of the energy we use for delivering electricity to our homes and businesses is wasted during the generation and transmission of that electricity. That leads to completely unnecessary pollution and carbon emissions contributing to our poor health, damaged lands, and climate change.

Climate change is causing more severe weather events and making our summers hotter. When a powerful storm sends those big brown poles crashing down or a sweltering day forces people to crank up their air conditioning units, the entire system can blow a “fuse.” That is essentially what AEP is trying to avoid in Ohio right now with its targeted blackouts. The more “widespread” problem they are trying to avoid might look at a lot like the 2003 blackout Ohio-based FirstEnergy triggered, the biggest blackout out in North American history, affecting 50 million people, killing at least 11, and causing billions of dollars’ worth of damage.

So far, policymakers and industry leaders have come up with band-aids at best. Do you know that our electric utilities often give manufacturers lower electric rates if they agree to allow their power to be shut down during times of high peak demand? What kind of solution is that? Not a good one.

A far better solution is for our elected officials to put policies in place to upgrade the grid. Modernizing our electrical system requires: 1) decentralizing energy generation by locating energy production closer to where it’s consumed; 2) increasing the use of local renewable energy sources, 3) adopting combined heat and power technology — a more efficient source of heat and power for our factories, 4) reinforcing the grid for electric vehicles and buses; 5) putting more of our electrical transmission system underground to better weather storms (along with fiber optic cable for quality broadband), and 6) providing funding for home weatherization, efficient commercial building technology and green building.

In 2008 Ohioans finally pushed our elected officials to begin the work of modernizing the state’s electric grid. Lawmakers passed Senate Bill 221 which required Ohio’s electric utilities to increase use of renewables and advanced energy sources like combined heat and power, while promoting the provision of energy efficiency services. Ohio would have had a solid head start towards upgrading its grid if lawmakers left the law in place. However, over the course of more than a decade, FirstEnergy relentlessly led a utility effort to corrupt the process and some of our policymakers. They successfully lobbied to bleed the provisions of the clean energy bill to death. In 2020, they put the final stranglehold on it by (allegedly) bribing lawmakers to pass House Bill 6. HB 6 effectively eliminated Ohio’s clean energy laws and gave billions of dollars to FirstEnergy and other utilities like AEP.

Why, you ask, would a utility company fight what so obviously is needed? Because decentralizing energy is the single biggest threat to big energy’s monopoly profits.

So, while the climate heats up and our electric power goes out – yet again – you can blame our Big Energy monopolies and the political friends they bribed (allegedly), for the 15 years of potential progress we lost.

The good news is that the Bipartisan Infrastructure Law passed by Congress last year contains a down payment on our climate infrastructure needs. But the dire situation in Ohio this week shows that we need to go even further and call on our federal lawmakers to pass a full-blown national climate infrastructure package (the bill formerly known as Build Back Better).

So, let’s get on it. We can break the hold big energy has on us, eradicate monopoly profits, reduce energy waste, and lower costs while promoting clean energy and the efficient use of scarce resources, reducing pollution and improving public health. We can do all of this while creating good union jobs modernizing the grid and bringing it into the 21stcentury.

A win win win. At least, for everyone but big energy.