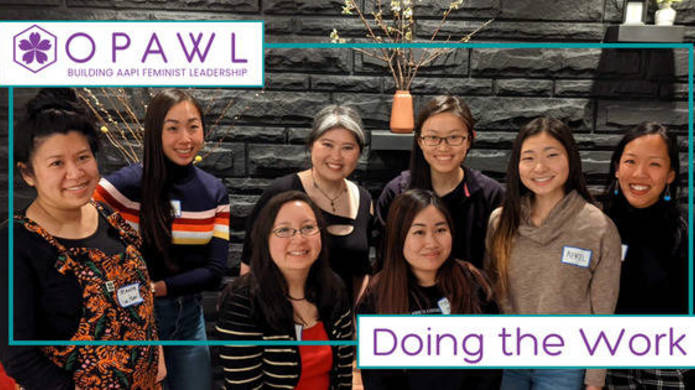 Before she moved back to Ohio nearly three years ago, Brecksville native Sharon Kim was an activist in her Brooklyn, NY neighborhood, Greenpoint. A clinical research administrator by trade, she advocated for single payer health care and served as President of Friends of Greenpoint Library.

When she arrived in Central Ohio with her family, Sharon wanted a way to connect with likeminded members of the AAPI (Asian, Asian American, and Pacific Islander) community. She was pleasantly surprised when a Google search led her to OPAWL – Building AAPI Feminist Leadership, formerly known as Ohio Progressive Asian Women's Leadership.

By the time Sharon found OPAWL, the organization was nearly four years old. Back in 2016, OPAWL founder Kelly Hill gathered with Suparna Bhaskaran and Rebecca Nelson to create a movement home for AAPI women and non-binary people in Ohio.

“There wasn’t a space for people like us, both in the existing local AAPI organizations and in Ohio’s progressive spaces,” said Tessa Xuan, OPAWL statewide co-director. “There were a lot of great AAPI organizations across the state that focus on cultural events, or providing social services to immigrant groups. But some were really male-dominated, not welcoming to LGBTQ folks, or explicitly apolitical. Being an explicitly progressive and feminist AAPI base-building organization was new.”

Early on, OPAWL hosted small gatherings like potlucks and film screenings in members’ living rooms. Their first official event was a gathering to watch a documentary about iconic Chinese activist, Grace Lee Boggs. Today, the organization has four staff, 230 members, and is growing.

OPAWL builds collective power for AAPIs in Ohio, stands in solidarity with Black and brown Ohioans, and develops AAPI feminist leadership. They bring members together to connect and have fun; tell their stories through art; engage members and the public through political education and advance specific issue campaigns. Sharon and other OPAWL members have made improving the public’s understanding of AAPI history one of their key priorities. For example, most Americans were never taught about the U.S.’s secret war in Laos, which became one of the most heavily bombed countries in the world. The group held testimony workshops to train AAPIs and allies to advocate for SB 214, which would require Ohio schools to include AAPI history in K-12 curriculum. Now they are working on building a multiracial coalition of students, teachers, and caretakers to push for a broader bill that would create a more inclusive history curriculum.

“Our goal is to build an organization where our members have shared power and shared leadership,” said Tessa, who previously worked as a nonprofit strategic planning consultant.

OPAWL has eight member-driven caucuses: Location-based groups in Cleveland, Cincinnati and Columbus; LGBTQ, youth, multigenerational networking, the Roots Reclamation Project for refugees or people with a history of forced displacement; and Kaarawan, the Filipinx caucus.

Claiming space for AAPIs in Ohio

Tessa said that from the beginning, OPAWL leaders knew their members were their greatest strength, but that relying on volunteers would have its limits. In 2020, OPAWL received funding from the Ohio Census Advocacy Coalition to engage Ohio’s AAPI community in the U.S. Census. Over time the group was able to bring Tessa and Jona Hilario on part time as Co-Directors. They called their census campaign “{in}VISIBLE in Ohio.”

“I think white supremacy has tried to erase AAPIs in a lot of ways,” Tessa said. “You don’t read about us in the history books. We’re not well represented in government and media. There’s just a huge portion of the population that knows very little about us, which has a lot of impacts. Ignorance of the struggles that we face leads to bad policies and allows stereotypes to propagate. But I’ve learned that there are so many more of us dedicated to social change in Ohio than I ever could have imagined as a child growing up here. And there is a long legacy of AAPIs, in addition to brilliant Black and Brown feminist change makers, that we can learn from.”

OPAWL’s census efforts included a statewide virtual teach-in. They attracted more than 200 participants for community conversations. Their social media storytelling campaign featured AAPIs from across the state and reached 27,000 people directly. A paid digital ad campaign with Ohio Voice was seen by more than 143,000 people. The work clearly paid off. The 2020 Census showed that Ohio’s AAPI community was among the state’s fastest growing groups – increasing by 58% since 2010.

As much sense as it makes to fund AAPI organizations to reach the AAPI community, only 20 cents out of every $100 in philanthropic grantmaking goes to AAPI organizations, according to Asian Americans / Pacific Islanders in Philanthropy. About one-third of that money goes to California-based organizations. After a man went on a shooting spree in Atlanta and murdered six Asian women and two other people in 2021, Tessa said some local funders realized they needed to begin investing in AAPI organizations.

The Atlanta mass shooting is one especially deadly example, but xenophobic political rhetoric has fueled anti-Asian hate and intensified across the country during the pandemic — especially against women and seniors. Soon after Atlanta, another man killed several workers including four Sikhs at a FedEx facility in Indianapolis. It has been a traumatic time for many AAPI Ohioans: Some OPAWL members experienced personal attacks against them and their families, including being spit on and racialized verbal abuse. Meanwhile, many Southeast Asian refugee communities face systemic violence of increased detention and deportation by Immigration and Customs Enforcement (ICE) and Customs and Border Patrol. OPAWL now incorporates healing into many of their events. While AAPIs are often invisible in Ohio’s centers of power, Tessa said they are “hypervisible” in their daily lives.

“We look visibly different,” she said. “So even though we are rendered invisible in a lot of ways, the stereotypes propagated by media, the military, and U.S. foreign policymakers make us vulnerable to violence and microaggressions — especially those of us who are trans, disabled, women, or working class.”

This year, OPAWL is continuing the issue-based campaigns around immigration justice and BIPOC history curriculum in schools, and will also speak directly to AAPI voters about the state supreme court race. OPAWL is contracting two transformative justice co-organizers to work with members to develop tools and practices for healthy conflict engagement, that can model alternatives to a justice system based on incarceration and punishment. Above all, OPAWL members will be claiming their space in Ohio, and continuing to make room for joy and belonging — including more potlucks in members’ living rooms.

“If you look at what the press says about who is an Ohioan, it’s incorrect,” Sharon said. “That’s why I am so dedicated to OPAWL because our lived experience about what it means to be an Ohioan is not reflected in the general narrative.”