ReImagine Appalachia is a coalition of policy, labor, environmental and racial equity groups working toward recovery and prosperity for Ohio River Valley communities, co-directed by Policy Matters Ohio Senior Researcher Amanda Woodrum. The ReImagine blueprint of policy solutions has been endorsed by over 120 organizations working in Appalachia, including Policy Matters Ohio. As part of our shared economic and workforce development agenda, ReImagine advocates the expansion of union apprenticeship programs as an accessible pathway to family-sustaining jobs.

The Bipartisan Infrastructure Law (BIL) sent transformational federal funds to Appalachia and across the nation, especially for green infrastructure that will slow climate change. However, funding alone is not enough to address Appalachia’s needs; the money must come with recommendations and stipulations that ensure the creation of good, union jobs that are available to people who are often excluded from opportunity based on their race, gender or where they live. The Biden administration’s BIL Good Jobs Initiative helps do this by creating opportunities for people who are learning a trade as apprentices and pre-apprentices to train on federally-funded projects. Apprenticeships and pre-apprenticeships, especially those run by unions, have massive potential to transform Appalachia’s workforce. Given the renewed discussion of apprenticeships and pre-apprenticeships sparked by the BIL, here are the ABCs of apprenticeship.

Apprenticeship is a centuries-old practice that originated in Europe. Today, the practice has been standardized into apprenticeship programs. Most prevalent in the industrial and construction trades, apprenticeship programs allow their trainees to learn by doing, while being mentored by those already certified in their trade. Many apprenticeship programs are jointly funded by the unions and employers. These programs blend on-the-job training with classroom instruction, providing a holistic experience that trainees can immediately put to good use. Despite their substantial benefits, apprenticeships are under-utilized in the United States. For example, in 2019, Pennsylvania’s Keystone Research Center estimated that while apprentices make up more than 1.5% of the labor force in countries like Germany, Australia, Canada, the United Kingdom, and France, they make up only 0.3% of the labor force in Pennsylvania.

Apprenticeships are beneficial to both employers and employees. Employers get committed employees that are specially and expertly trained in their trade. Employees get pathways into good, family-sustaining, union jobs, and they earn a steady paycheck while training for those jobs.

Why should these programs matter, right now, to Appalachian communities?

Absentee corporations in extractive industries have long exploited the resources of the Ohio River Valley, forcing many people who live there into poverty-wage jobs while leaving the land scarred and the water and air contaminated. To effectively combat these pervasive issues, we must ensure that there are accessible pathways to good, union jobs, and that people who need those good jobs have the skills to take advantage of those pathways.

Apprenticeships can help address Appalachia’s challenges. They provide a no-debt model of learning and, in some apprenticeship programs, earning college credit or associate degrees. These programs recognize the importance of workers’ skills and cultivate those skills accordingly to build career pathways into quality jobs. Instead of condescending to working people, apprenticeships recognize the crucial nature of their contributions.

Some apprenticeship programs enable apprentices to earn college credit or degrees as they complete their training. The Electrical Trades Center partners with Columbus State Community College and Franklin University to coordinate opportunities for a college education stemming from their apprenticeship programs. The Finishing Trades Institute in Philadelphia is accredited to confer associate degrees as a standalone institution; in addition, it has articulation agreements with a number of Pennsylvania universities. Apprenticeships are often the cheapest route to college and a family-sustaining job, all at the same time. 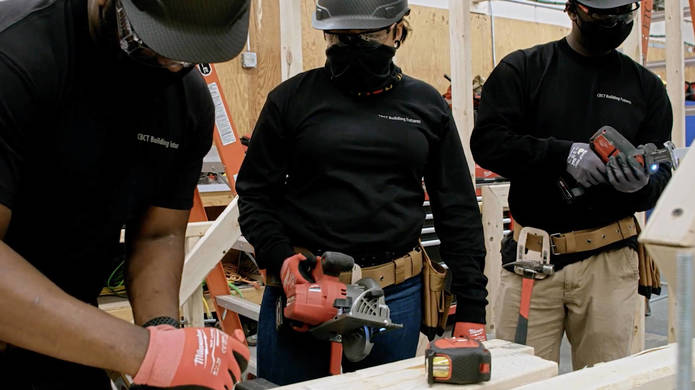 How can we ensure that funding for these programs benefits people who are often excluded, exploited or underserved?

How do these programs fit into ReImagine Appalachia’s agenda?

Finally, support for apprenticeships should be woven into a larger policy agenda to promote equity and dignity for all workers and their families, no matter their trade. In addition to calling for increased support for apprenticeship programs, ReImagine Appalachia calls on policymakers to pass a substantial increase in the minimum wage and fiercely protect union rights for all.