Columbus educators, students and parents show the power of solidarity

Columbus educators, students and parents show the power of solidarity

Educators and students are returning to Columbus City Schools (CCS) this week with renewed spirits and a new sense of hope that they will get the building conditions and support that they need and deserve.

It’s truly a victory for the entire community. Today, many corporate-backed politicians and interest groups attempt to pit parents against teachers by using racially tinged scare tactics. Instead, parents, students, and community members joined striking members of the Columbus Education Association (CEA) on the picket line to demand better conditions in the schools.

“The board needs to listen to the staff and faculty of schools that are on the ground floor,” said Byron Lewis, II, a parent and alumni of Northland High School. “They are the frontline workers. They will let you know when something is amiss.”

CCS is full of unsafe school facilities with leaking or missing ceiling tiles, lead-based paint, and old and broken playground equipment. Like many districts around the state, CCS has widespread teacher and staff shortages. The union wanted educators to be paid more fairly for the important work they do, but also demanded many provisions that would especially benefit students. They wanted expanded music, arts, and physical education programs, smaller class sizes, and proper heating and cooling systems in buildings. When the Columbus Board of Education (CBOE) couldn’t meet their demands, 94% of CEA’s 4,500 members voted to go on strike. The contract they approved Sunday improves conditions for both students and educators by raising pay by 4%, reducing class sizes, and guaranteeing that all schools have proper HVAC systems by the 2025-2026 school year. 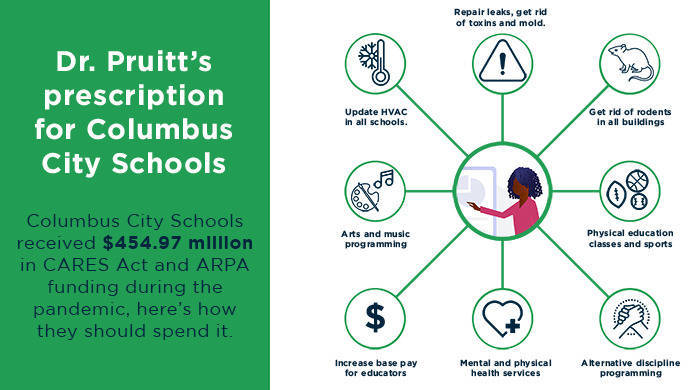 The problems that led to the strike were years in the making. Decades of residential segregation and redlining created large urban districts, such as CCS, with high concentrations of Black, brown, and economically disadvantaged students. With government policies directing private and public resources away from urban communities, districts like CCS were at a disadvantage under Ohio’s unconstitutional school funding system. Until they finally fixed how Ohio funds schools in the 2022-23 state budget, lawmakers had shortchanged lower-income districts like CCS for 40 years by forcing districts to over rely on local property taxes.

Local officials have also shifted resources away from CCS. Last year, Columbus City Council approved the most tax abatements for wealthy developers and corporations ever, costing CCS $51 million. Since 2014, the share of the district’s budget drained by local tax abatements has risen by just over 200%.

COVID also took a toll on an already strained district. Data shows that during the 2020-2021 school year CCS had the highest percentage of third graders (54.7%) with low scores. Students also fell through the cracks and became chronically absent, and suffered from social, emotional and mental distress.

The problems are challenging, but the good news is we have the tools and the resources to address them. State lawmakers need to commit to fully phasing in the Fair School Funding Plan (FSFP) passed in the last state budget. In our current state budget, the FSFP includes a 7.1% increase in funding for CCS by 2023, which roughly equates to an increase of $245 in per pupil spending. If the FSFP is fully implemented, these numbers will continue to rise and create a more equitable school funding system in the state. Locally, city leaders need to first; make tax abatement data more robust and transparent to the public and second; ensure any tax incentive packages and policies prioritize the public interest over the profits of wealthy corporations. Providing quality jobs, expanding shared prosperity, and creating vibrant communities for Columbus residents of all races and income levels should be the goal of every development deal.

The district should be using the local, state, and federal funds that they have at their disposal to continue to meet the needs of the students and teachers in the schools in this current contract and beyond. According to the Ohio Department of Education (ODE) Columbus City schools received just under $455 million dollars in federal COVID aid. It is up to district leaders to use these funds and use them wisely.

Teachers, parents, students, and other community advocates showed what they can do when they come together. We all have a responsibility to continue to hold lawmakers and district leaders accountable in how their schools are funded and how funds are being used. We can make sure that all students have what they deserve so educators do not have to resort to striking in the future.