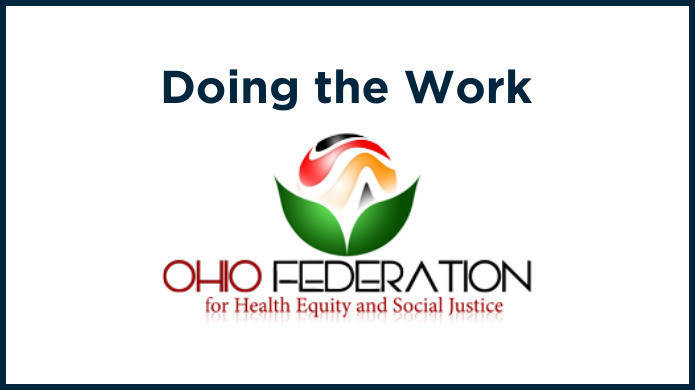 Today, many public health experts and advocates are tackling the “social determinants of health” in response to a growing body of research that show how a person’s environment, housing, family life, race and income all play a role in shaping their well-being and health outcomes. Ron Browder, a native of rural central Alabama, however, didn’t need peer reviewed journals or long-term studies to know that was true. He and his brother were raised by their grandmother and aunt after his mother moved to New York for work. She later returned and relocated with her sons to Columbus, Ohio. Friends and family members who had fallen on hard times frequently came to stay at their home.

“Our mother cared for us and always showed up for us at school,” Mr. Browder said. “To keep us active and in a positive environment, my mother created a Cub Scout troop in our community and became the den mother for me, my brother and five other young boys.”

Today, Mr. Browder runs the Ohio Federation for Health Equity and Social Justice, a key partner of Policy Matters in our work to provide more resources and support for kinship families in Ohio. Kinship care is when children are removed from their biological parents and placed in the care of family friends or relatives. Ohio lawmakers give less support to children in kinship families than those in foster care.

Mr. Browder, who formerly served as the executive director of Children’s Defense Fund-Ohio saw how Ohio policymakers failed to support kinship families up close. After receiving a bachelor’s degree from the Ohio State University and a master’s degree from the University of Dayton, he eventually became Bureau Chief for Child and Adult Protection, Adoption and Kinship, at the Ohio Department of Job and Family Services (ODJFS). Mr. Browder concentrated on getting children out of the child welfare and juvenile justice systems.

Mr. Browder brought that experience with him when he co-founded the Ohio Federation for Health Equity and Social Justice with the late Cheryl Boyce in 2011. Ms. Boyce, who previously served as the first chief staff person on Gov. Richard Celeste’s Task Force on Minority Health, focused on the physical, emotional, mental, and oral health of children, adults, and older adults.

Both understood that the health and economic security of a family affects whether a child and their family become entangled in the child welfare or juvenile justice system, and those systems impact the health of people within communities of color. Children who end up in the juvenile justice system and the child welfare system are more likely to struggle with economic insecurity and worse health, and vice versa, creating a negative feedback loop for families and communities.

“Children shouldn’t be involved in these systems because they’re poor and Black,” Browder said.

Ms. Boyce and Mr. Browder also recognized that a person’s health depends on much more than medical care. The quality of housing plays a huge role. Lead paint, mold, or a lack of heating and cooling can make people sick. So, the Federation has worked with metropolitan housing agencies to find safe, affordable housing for kinship families.

The Federation can trace its roots back to Ms. Boyce's role on Gov. Celeste’s task force. Celeste created the task force in response to the U.S. Department of Health and Human Service’s 1985 Heckler Report, which found that Black, Latinx, Native American, and Asian and Pacific Islanders “have not benefited fully or equitably from” health care systems in the United States, despite advances in science and medicine. Celeste charged the task force with studying the health of these populations and making recommendations to improve it. At that time, there was limited health data collected or available by race and ethnicity in Ohio.

Senator Ray Miller, one of the co-chairs of the task force, said Ms. Boyce recruited nearly every member of the task force and played a critical role in defining the work and outlining their goals. She organized hearings in communities across the state, so the task force could hear directly from these populations. The task force’s work led to the creation of the Ohio Commission on Minority Health, which provides information and resources to community-based organizations working to improve the health of communities of color in Ohio. Ms. Boyce was named the first Executive Director of the Ohio Commission on Minority Health in 1986 and served through 2010. She continued to work for health equity and social justice until she passed away in 2020.

Years after the commission was formed, Ms. Boyce said, “We will never create health equity in this country until the people for whom this cause is the most personal are at the table, participating in what’s happening.”

Today, the Federation continues to put people with low wages and communities of color who are directly impacted by projects and policy decisions in the middle of the discussion of those projects and policies. For example, recently a developer in New Albany asked the Federation for input on how to ensure diversity in management and staff. Federation members observed that without public transportation to New Albany, it would be nearly impossible to have diversity of race and ethnicity in the workforce.

The Federation also builds the capacity of leaders and empowers people in the community to shape and tell their own story. While the pandemic changed how this work happens, the principles remain the same. The Federation meets with people where they’re at, learns more about the issues and concerns people are facing in their community, and they ask about who has the power to make a change related to those issues. The Federation also offers webinars and workshops to help people think about what messages they want to send to decision-makers and how to deliver their message.

The Federation is working now with historically Black colleges and universities (HBCUs) to identify and support new leaders in health equity and social justice. They’re working on a leadership development program that will launch early next year. The Federation has a series of Black and Latinx leaders lined up to talk about their path to leadership in social justice and health, such as Dr. Evelyn Crayton, the first Black president of the National Academy of Nutrition and Dietetics. The goal is to support young Black and brown people to grow their leadership potential.

Mr. Browder says the Federation also welcomes people from all communities to the table. “You don’t have to be a minority,” he said. “We need you to be honest and authentic. And you have to be willing to share power with people who don’t look like you.”

In fact, Mr. Browder says a deep commitment from all Ohioans — especially the most powerful — is necessary. After the police killed George Floyd, Mr. Browder put out a call to action op-ed in the Columbus Dispatch. “We do not need well-intentioned business leaders gathering signatures on a statement declaring racism unacceptable,” he wrote. “Rather the time for action is overdue. Look at your boardrooms, look at your organization’s senior leadership, look at your workforce. If they do not reflect the diversity of America, drop the signature gathering and set a leadership example and hold your organization accountable for following it.”

I hope you’ll consider supporting the Ohio Federation for Health Equity and Social Justice so they can continue doing this critical work. You can check out their website and donate here.