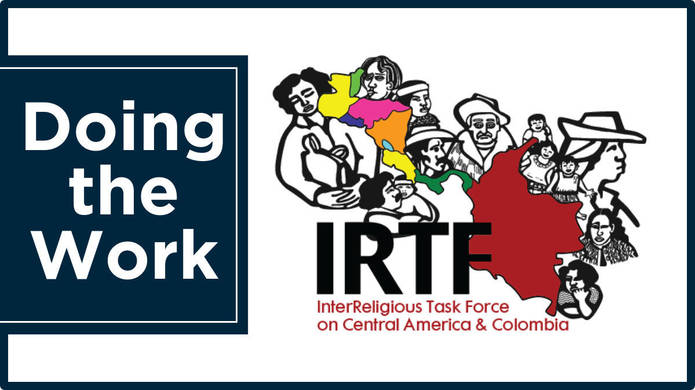 Simply by comparing our organizations’ names, a person could imagine major differences between the work of Policy Matters Ohio and that of the InterReligious Task Force on Central America and Colombia (IRTF). And yet, we regularly find ourselves working alongside the IRTF’s passionate, compassionate co-director, Chrissy Stonebraker-Martínez. I asked Chrissy how to account for all the overlap between two organizations focused on regions separated by the bulk of a continent. Their answer: Solidarity transcends geography. Working people in Ohio and Central America are much closer than a map can show.

There’s no story of the IRTF without the story of the martyrs: four Catholic women from the U.S. who were murdered in El Salvador in 1980 by members of the Salvadoran National Guard as part of a state-sponsored campaign of terror. Because two of the women — Jean Donovan and Sister Dorothy Kazel — were from Cleveland, the murders hit home. Members of the Cleveland Central America Solidarity Committee formed the IRTF to focus on faith communities as sites for education, action and solidarity. Since then, the IRTF has expanded its work to include solidarity with those resisting militarism and imperialism throughout the nations of Central America (El Salvador, Guatemala, Honduras, Mexico and Nicaragua) and Colombia.

The martyrs were driven by faith to stand in solidarity with the Salvadoran people who embraced them — with full knowledge of the risks they faced. For Chrissy, this insistence on remaining with the people with whom they built community is a moment when “charity” was clarified into “solidarity.”

That spirit of solidarity and collaboration infuses all of IRTF’s work, including their ongoing El Salvador Solidarity Fund, which supports grassroots organizing and communities who’ve been impacted by renewed suppression in El Salvador. IRTF also provides workshops and trainings in effective strategic action to resist all forms of violence and build the type of world we want to live in, including:

IRTF also functions as a news network for those directly harmed by U.S. immigration policy and racial injustice. Their monthly Migrant Justice Newsletter is an invaluable resource for migrant communities and those who are in solidarity with them. Check out recent issues here, and subscribe here.

IRTF coordinates a rapid response network of letter-writers and signatories responding to urgent human rights alerts from Colombia, Central America and Southern Mexico. The letters help protect people living under threat, demand investigations into human rights crimes and bring human rights criminals to justice. They send these letters to U.S. congresspersons, ambassadors, human rights officers, the Inter-American Commission on Human Rights, representatives of the United Nations and officers of the U.S. State Department. Read recent letters and learn about the cases they address here. Join and support the RRN here.

One way IRTF’s work differs from the work done by many of our partners is the org’s “intentionally limited participation in advocacy.” Although IRTF frequently joins with groups that build political power around specific issues or legislation, they put more energy into what Chrissy calls, “prefiguring the new worlds we’re building.” For me, that’s really inspiring — a way to live and act with and for each other now, in this moment, while also supporting work that makes possible the kind of deep structural change that happens through policy.

At Policy Matters Ohio, we talk a lot about “movement building” — the idea that smart, research-driven policy solutions alone aren’t enough, and that we need to build momentum, which means building power with people, which requires growing genuine relationships. That takes time. But it also takes energy, commitment, and shared values that we build together. I asked Chrissy what they thought about movement building. They spoke about the “Beloved Community” — a term popularized by Howard Thurman and expanded on by the Rev. Dr. Martin Luther King, Jr. — the ongoing Movement for Black Lives, and other current iterations of grassroots resistance. While these movements have concrete policy goals, they are about much more than that — because they have to be, because the power to enact progressive policy can only come from the people, and we have to build that power together, in our neighborhoods and streets and homes and families. That takes ongoing, interpersonal, spiritual work at the human level, and that’s the kind of work IRTF is doing.