Under revised overtime rules proposed by the Bush administration, more than 8 million white collar workers nationally and more than 350,000 in Ohio, including some who earn as little as $22,100 per year, could become ineligible to receive extra pay when they work more than 40 hours a week. This is the conclusion of a new Economic Policy Institute (EPI) briefing paper. The Ohio numbers were released today by Policy Matters Ohio.

“Eliminating the Right to Overtime Pay,” by EPI Vice President and Policy Director Ross Eisenbrey and EPI Acting Research Co-Director Jared Bernstein, critiques a Labor Department estimate minimizing the impact of the proposed rules and provides a detailed description of the true impact of the changes. The new rules could be in place by the fall.

The revised regulations, proposed by the U.S. Labor Department on March 31, would dramatically increase the number of workers ineligible for overtime pay because they are classified as professional, administrative, or executive. Blurring of lines between managerial and hourly staff, coupled with downgrading of educational standards required to exempt employees from overtime pay, will encourage employers to switch millions of workers nationally from hourly to salaried status in order to avoid paying overtime.

“Under the guise of modernization, the Bush administration is threatening to gut the right to overtime pay for millions of workers,” said Bernstein. “These changes will lower the income of working families, many of whom depend on overtime pay to make ends meet.”

Among those who stand to be affected by the changes are workers with little more than a high school diploma and little or no on-the-job discretionary authority or responsibility. Also affected would be frontline supervisors who spend most of their workday doing the same tasks as those they supervise. Under the new rules the supervisors could be reclassified as executive or administrative employees who would no longer be able to claim extra pay for hours worked above 40 per week.

The proposal would greatly reduce the education required for a worker to be categorized as a “learned professional” and therefore ineligible for overtime pay. The new definition would no longer require a degree beyond a high school diploma for this classification. Work experience or military training will be allowed to substitute for education and no minimum amount of such experience or training is established.

Similar loosening of how executive and administrative functions are defined and how much of a job must be devoted to such duties gives employers wide latitude for redefining many jobs as ineligible for overtime.

In one area, the administration’s rules represent an improvement: they raise the minimum pay level below which overtime eligibility is automatic. This change, however, is more than counterbalanced by other changes in eligibility rules. In the new work world defined by these new rules, any worker who earns $425 or more a week, supervises two or more employees, and has a minimal amount of training or experience beyond high school is more likely to be denied overtime pay.

The harshest impact will be felt, of course, by workers who are now receiving overtime pay and will no longer be able to do so. Changes proposed by the administration are likely to bump millions of workers who are now eligible to receive overtime pay into exempt status; not only will they not receive time-and-a-half after 40 hours of work, they won’t even receive any extra straight time pay for their overtime hours.

“Current overtime laws help prevent employers from forcing workers to put in more hours than they’re paid for,” said Amy Hanauer, Executive Director of Policy Matters Ohio. “If these rule changes go through, more than 350,000 Ohio workers will lose that protection. With families already working more hours than ever before, it is a dangerous time to eliminate such protections.” 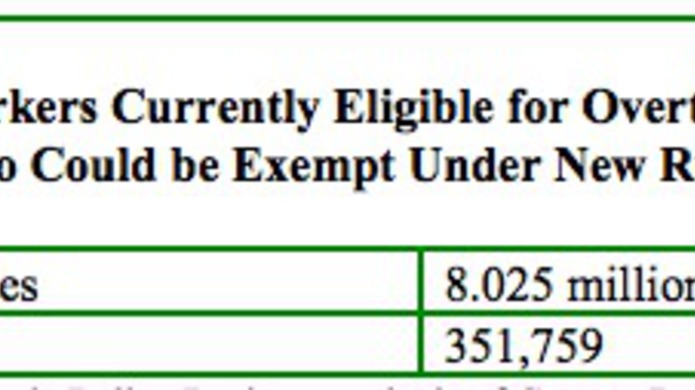 Policy Matters Ohio is a non-profit, non-partisan policy research institute with offices in Cleveland and Columbus, available on the web at www.policymattersohio.org

The Economic Policy Institute in a nonprofit, nonpartisan economic think tank founded in 1986. The Institute can be found on the web at http://www.epinet.org.