Benefits attributed to Ohio's Enterprise Zone Program (EZP) are more likely to go to higher-income school districts than to lower-income school districts, according to a new study conducted by Kent State University Assistant Professor Mark Cassell. “Of benefits attributed to the program, five times as much real property investment and twice as many jobs go to the highest-income districts, compared to the lowest-income districts in the program,” Cassell said.

Zoned Out: Distribution and Benefits in Ohio's Enterprise Zone Program will be published October 29th by Policy Matters Ohio. Funding for the research was provided by the Ohio Urban University Program.

Created to spur economic development and job creation in depressed areas, the EZP provides property tax abatements to firms that locate, expand, or increase investment within zone borders. Drawing on school district level data, Cassell finds that the benefits attributed to the program -- jobs and investment -- are much more likely to accrue to higher-income school districts in Ohio. Lower-income districts are slightly more likely to participate in the program, controlling for race, population and urbanization.

The study's findings include the following: 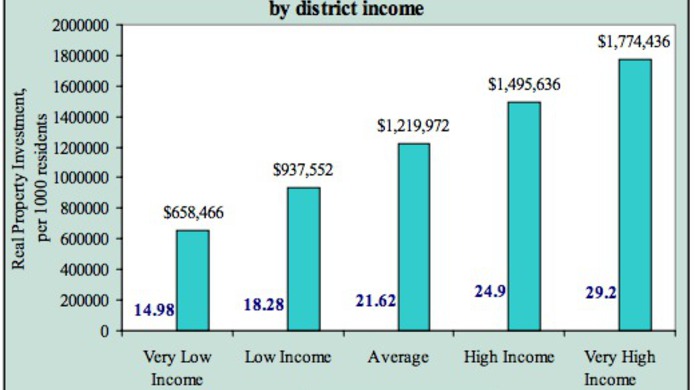 The study relies on official Ohio Department of Development information compiled through a cooperative effort between firms participating in the program, local economic development directors, and Tax Incentive Review Councils.

“Poor districts are receiving fewer of the benefits claimed by the program than affluent districts,” said Cassell. “That suggests that a program designed to help economically disadvantaged areas has become an important economic development tool for high-income areas in the state.” In 2005, Ohio lawmakers will likely consider whether or not to renew the law authorizing Ohio’s Enterprise Program.