Families in Ohio are taxed at a lower income level than families in all but five states according to a new report by the Center on Budget and Policy Priorities, released here by Policy Matters Ohio. Ohio levies income taxes on single-parent families of three who earn as little as $10,300 a year, and on two-parent families of four who earn as little as $13,000. Only Alabama, Kentucky, Montana, West Virginia and Hawaii levy income taxes on families earning less than these thresholds.

Representative Sally Conway Kilbane is examining a proposal to flatten rates, drastically reduce taxes on the richest Ohioans, and eliminate taxes on some of the poorest Ohioans. This approach would make the system more burdensome to most modest- and middle-income households. It would shift $1 billion in taxes from those making more than $100,000 to those making less than that, and increase taxes on more than half a million taxpayers making less than $20,000 a year. Currently Ohio has nine tax brackets, with tax rates increasing gradually as income increases. Preserving a system with a number of brackets, while exempting poor families, would ensure that those most able to pay bear the largest share of the burden.

“Ohio does a relatively good job of having an income tax system that generally levies higher taxes on those more able to pay,” said Bob Zahradnik, author of State Income Tax Burdens on Low-Income Families in 2003. “However, Ohio should consider proposals that preserve that approach, while reducing burdens for the poorest working families.”

Over the last decade, states generally have improved their income tax treatment of working poor families, according to the new report. From 1991 to 2003, for example, the number of states levying income tax on poor families of four declined from 24 to 18. By 2003, 16 states offered a state Earned Income Tax Credit, which is a credit for working families earning less than $34,000 a year. Ohio is one of just four states where the income tax threshold is further below the poverty line than it was in 1991 and one of just eight states that levy income taxes on families of three with one full-time, year-round minimum wage worker.

Income tax levels on poor Ohio families are modest – a family of three at the poverty line earns $14,675 and pays $79 in state income tax. However, such modest sums can be a burden to poor families who have difficulty paying for basic necessities. 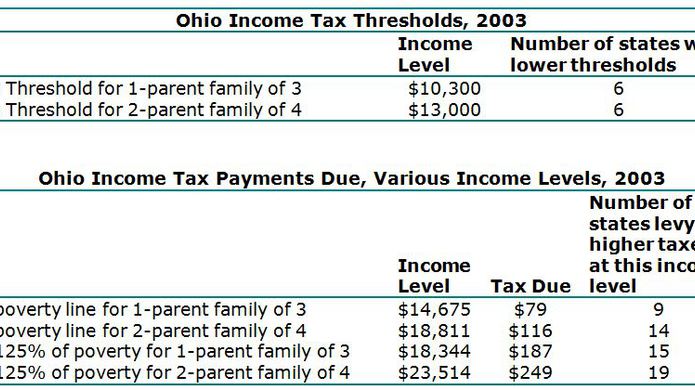