State income-tax cut would be expensive, unequal and siphon money out of Ohio

State income-tax cut would be expensive, unequal and siphon money out of Ohio

A 22 percent reduction in Ohio’s state income tax would cost the state more than $2 billion in annual revenue and would go overwhelmingly to the state’s most affluent taxpayers. Roughly one in seven of the dollars that the state government would no longer collect would wind up not with Ohio taxpayers but in additional taxes paid to the federal government.

Those are the conclusions of an analysis of the tax-cut proposal released February 3, 2005 by Policy Matters Ohio, based on calculations made by the Institute on Taxation and Economic Policy (ITEP), a research group in Washington, D.C., with a sophisticated model of the national and state tax systems. This type of tax cut has been roughly outlined in news reports as a possible part of a larger tax proposal being discussed by the Ohio Business Roundtable and Gov. Bob Taft.

Such a rate reduction is likely to bring a transfer of income from middle-income Ohioans to the richer taxpayers. Given the looming budget deficit, the state would have to finance such a reduction through increases in other taxes. Some news reports have indicated it might be paid through the sales tax. However, lower- and middle-income taxpayers pay a greater share of their income in sales tax than upper-income taxpayers do. Thus, paying for income-tax cuts with sales-tax revenue would transfer income to rich Ohioans from lower- and middle-income taxpayers. Extending the penny increase in the sales tax that is expiring at the end of June also would not produce anywhere near enough revenue to pay for a 22 percent cut in income-tax rates.

ITEP’s figures indicate that an across-the-board 22 percent reduction would reduce state revenue by over $2 billion a year. However, nearly one in every seven dollars no longer collected by the state -- $284 million -- would end up going to the federal government, not Ohio taxpayers. That’s because the cut in state income taxes would leave taxpayers with less to deduct on their federal tax forms, forcing them to pay higher U.S. taxes. That is one major reason why such a tax reduction would not bring a stronger Ohio economy.

The table below illustrates how reducing all rates by 22 percent would affect various income groups in Ohio (note that this analysis does not include other tax changes that might be included in a package): 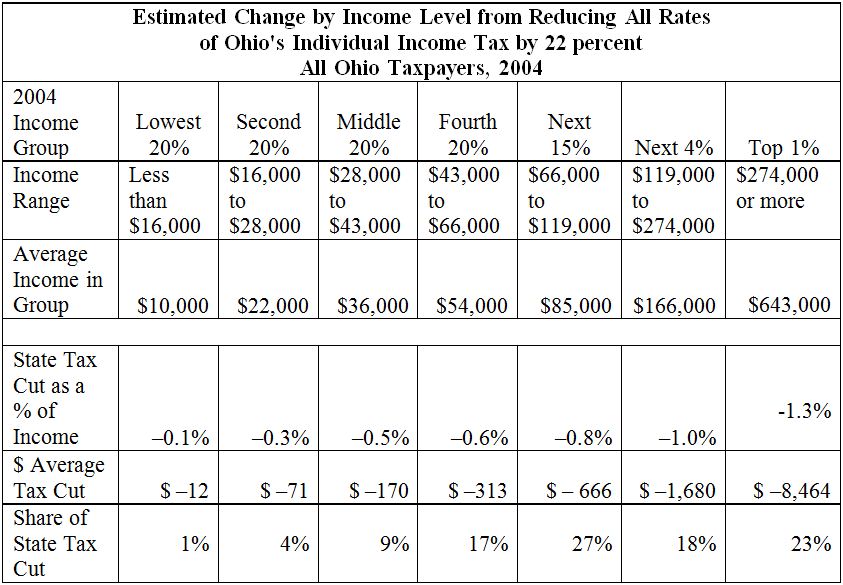 There is little evidence to support claims that Ohio income-tax rates are hampering economic growth. States such as North Carolina and California, with among the highest top income-tax rates in the nation, developed high-technology centers that we envy. A recent survey of the economic literature by Robert G. Lynch, chair of the economics department at Washington College, found little grounds to support tax cuts as the best way to spur growth, particularly when the cuts result in reduced public investment.

Some news reports have described a plan that would reduce all rates and also eliminate the bottom bracket. That would eliminate the 0.743 percent rate paid on the first $5,000 of income (personal exemptions and credits reduce the actual amount due). While eliminating the bottom bracket would increase the gain for low-income taxpayers to an average of $23, it would not significantly alter who benefited. The table below illustrates how reducing all rates by 22 percent and eliminating the bottom bracket would affect various income groups in Ohio. The richest 1 percent of Ohioans each would receive an average of $8,493, or 22 percent of the total. 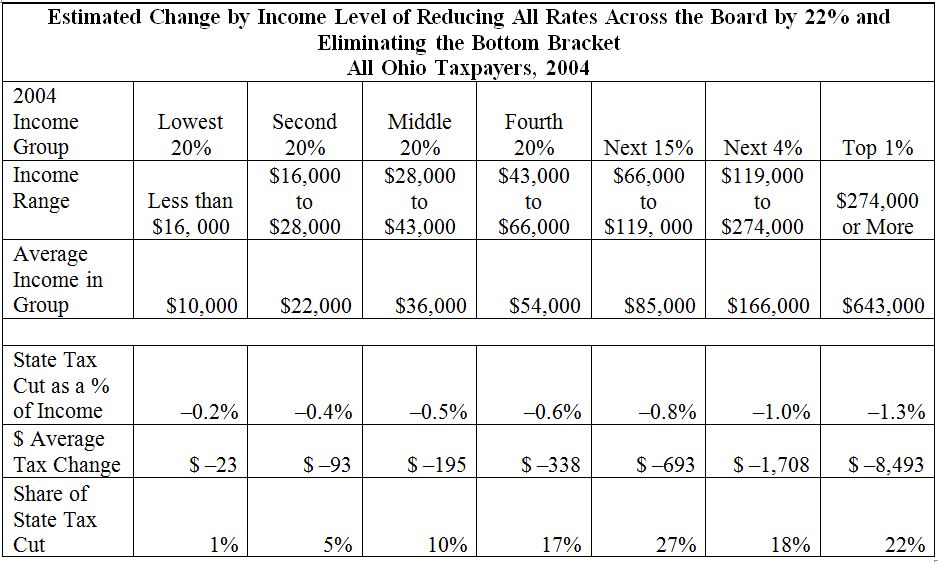 Ohio’s graduated income tax is a crucial element in keeping overall state and local taxes from being overwhelmingly tilted against middle class and low-income taxpayers. Other taxes require that Ohio’s less affluent citizens pay more as a share of their incomes than richer taxpayers do. As a result, high-income taxpayers pay a smaller share of their earnings in state and local taxes than Ohioans who make less. The income tax partially offsets this, and requires that more affluent people pay more, as they can afford to do.

The bottom 60 percent of Ohio’s workers have seen little or no increase in real hourly pay over the past 25 years. By contrast, the top 10 percent saw 19 percent growth between 1979 and 2003. An across-the-board cut in income-tax rates would increase this growing inequality.

The Institute on Taxation and Economic Policy is a nonprofit, nonpartisan Washington–based research group. Its tax model is similar in methodology and data sources to the elaborate computer models used by the U.S. Treasury and the congressional Joint Committee on Taxation, except that the ITEP model adds state-by-state estimating capabilities. The figures show the effects of 2004 state and local tax laws, at projected 2004 income levels.