The unemployment rate in Ohio continues to drop, falling from 8.5 to 8.1 percent in December 2011. However, data released today by the Ohio Department of Job and Family Services (ODJFS) from its separate survey of employers for December 2011 suggests that falling labor force numbers and not job growth is responsible for decline in the unemployment rate. 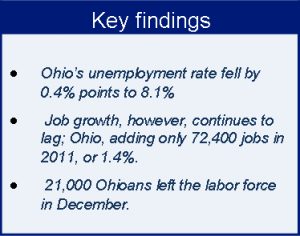 While month-to-month data is highly subject to revision, and it is ill advised to make month-to-month comparisons, it should be noted that ODJFS estimates based on the employer survey that 3,300 jobs were lost in December. Total nonfarm employment increased by only 72,400, or 1.4 percent, last year. At last year’s rate, it would take more than four years to restore the employment lost in the last recession.

Sharp declines in the number of Ohioans participating in the civilian labor force help to explain the drop in the unemployment rate in the absence of major job growth. Between November and December an estimated 21,000 workers left the labor force, according to the monthly survey of households.

Overall, recovery in Ohio remains painfully slow. Since the official end of the great recession (June, 2009), the state has added 55,700 jobs, an increase of 1.1 percent, the separate employer survey shows.

Many people, particularly during prolonged periods of high unemployment, stop seeking work and ‘drop out’ of the labor force. People may choose to care for children rather than continue to look for work, avoiding childcare costs. Some individuals may return to school or retrain for a different career. Others may be forced into early retirement after losing a job and being unable to replace it. Some are simply too discouraged to continue searching, applying, and receiving rejections. These individuals are not counted in the labor force or in the unemployment rate. To be counted as a member of the labor force and in the unemployment rate, an individual must be actively seeking work.

“While a falling unemployment rate is welcome news, we need sustained, major employment growth. Unfortunately, today’s data parallels November’s labor force decline and that is not good news for Ohio,” said Hannah Halbert, policy liaison with Policy Matters Ohio. “Investment in our economy has been too small, and recovery has been too slow. We see the consequences of austerity playing out in our labor force, and too many Ohioans becoming discouraged.”