Federal cuts under the 2011 U.S. “Budget Control Act” will take $312.6 million in federal funds out of Ohio in 2013, according to a new report by Policy Matters Ohio, based on an Ohio Legislative Service Commission analysis. Similar cuts will continue year after year until 2021. 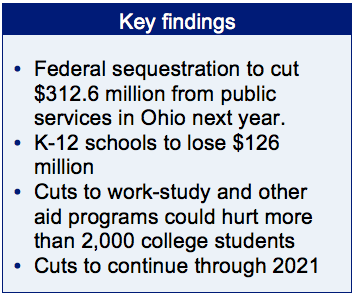 Ohio elementary and secondary schools, already slashed by $1.8 billion because of state budget cuts, will lose $126 million in federal funds, with eight long years of cuts like this pending.

Last summer, Congress refused to allow the Obama administration to boost the debt limit to pay its bills, and insisted on direct budget cuts and spending control mechanisms in exchange. The Budget Control Act that resulted raised the debt limit by an amount estimated to be sufficient through early 2013; in exchange, it cut funding for public services by $2 trillion over the next decade.  Half of this will be imposed through automatic across-the-board cuts of about 9 percent in 2013 followed by additional reductions in each of the following 8 years. This process, known as ‘sequestration’, will start in January 2013.

The Policy Matters brief is based on an Ohio Legislative Service Commission memo that projects costs to Ohio of the federal sequestration. The memo is based on assumptions and the LSC warns that predictions are inexact.

“The result of sequestration will be larger class sizes for our children, reduced support for clean water, less job search assistance and workforce training, and weaker emergency management services,” said Wendy Patton, report author and senior project director at Policy Matters. Some of the worst cuts from the sequestration include: