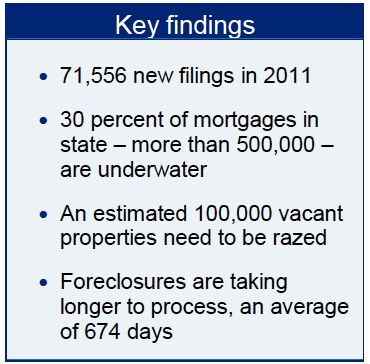 For the second year in a row, the number of foreclosure filings decreased in Ohio. New filings dropped to 71,556, a 16 percent decrease from last year, according to a report released today by Policy Matters Ohio. Housing trends, however, reveal thousands of delinquent properties and underwater mortgages, those worth less than is owed.

“Any reduction in foreclosure filings is a good thing,” said David Rothstein, project director for asset building at Policy Matters Ohio and report author. “It’s clear that mediation and foreclosure prevention programs are making a dent in the number of people losing their homes. Ohio policymakers must put more resources into these efforts because we’re still in crisis.”

Cuyahoga County again led the state, with 9 filings per 1,000 people and 11,544 foreclosures. The ten largest counties together accounted for more than 43,000 foreclosures. There was one foreclosure filing for every 71 housing units in the state in 2011.

The report finds much cause for concern. The data identify more than 500,000 underwater mortgages, and found that 8 percent of mortgages are seriously delinquent or in foreclosure. The loan-to-value ratio in Ohio is more than 76 percent, meaning that Ohio mortgage holders, in total, have less than 25 percent ownership in their home mortgages.

“While we’re cautiously optimistic about this decrease in foreclosures, we remain very concerned with the dismal indicators on home equity and delinquent loans. They show that more than one in three homes is ‘under water,’ or worth less than homeowners’ mortgages,” Rothstein added.

Recommendations
At the federal level, the report calls for increased funding for housing modification programs, an extension of the Mortgage Debt Relief Act, and the creation of bonds for demolishing vacant and abandoned properties. State solutions include legislation that regulates mortgage servicers, increases tenant protections during foreclosure, coordinates housing counseling and mediation programs, and bans foreclosure rescue scams.