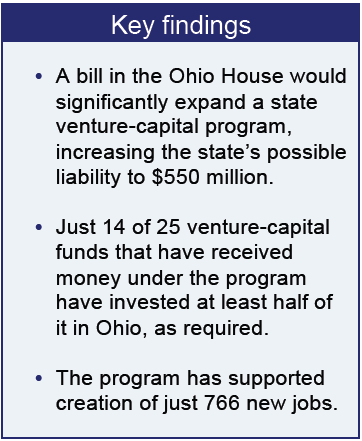 A bill moving through the Ohio House of Representatives would support a major expansion of a program that provides money to venture-capital funds though many of them have not met requirements to invest in Ohio. Eleven of 25 funds that have received money from the Ohio Venture Capital Fund have not invested at least half of the money in Ohio, as required by law, and some have not invested in the state at all.

Testifying before the House Ways & Means Committee today, Zach Schiller, Policy Matters research director, called for the committee to delay its vote on House Bill 511 until the program is further evaluated. However, the committee approved the bill. It could be voted on by the full House as early as tomorrow.

The program, established in 2003, depends on state tax credits, which support the issuance of debt that is then provided to various venture-capital funds. The state has not yet had to issue tax credits and will only do so if the investments that are made by the venture funds do not generate enough to pay off the bonds. Based on the current program, the state can be liable for up to $380 million in such tax credits. That amount was increased to $550 million through an amendment approved in committee today; no increase in the liability was included in the bill previously, through what proponents said was technical error.

Investment returns for the program have improved and the state may never need to issue tax credits, but it is not believable for this to be considered a cost-free program, as some proponents argue. “Just because this is an off-balance sheet liability does not mean it is not a liability,” Schiller said. “This is a call on the resources of the state, even if we have avoided an out-of-pocket expense.”

Since the General Assembly created the Ohio Venture Capital Authority in 2003, and the first funds were invested in Fiscal 2006, a total of 766 new jobs have been created. That does not constitute a large number in relation to the more than $100 million committed to venture funds under the program and its six years of operation. Policy Matters Ohio said the program should be tightened up so that firms invest more of the funds they receive in Ohio. It also recommended that the bill include a clawback mechanism so that, after a reasonable period of time to invest the money, venture funds that do not invest the bulk of it in Ohio repay it, with interest. The committee approved additional reporting requirements relating to Ohio investments and jobs. However, it rejected amendments that would have increased the Ohio investment requirements and created a clawback mechanism.