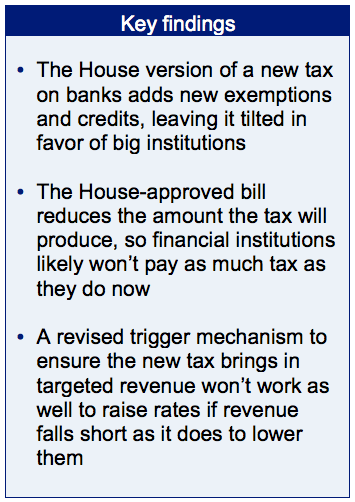 A proposed new tax on Ohio’s banks would provide millions of dollars in tax cuts to mortgage lenders, securities brokers, payday lenders, finance companies, and other so-called “dealers in intangibles.” It also would create a new way for insurance-company affiliates to cut taxes between now and 2014 by restructuring operations, and add other new exemptions.

These are just some of the ways that the Ohio House of Representatives weakened the tax proposal, HB 510, and undercut the most positive aspect of the original bill: to bring financial institutions under a single tax and reduce tax avoidance, according to a new brief by Policy Matters Ohio.

The bill was approved by the House in May and is now under consideration in the Senate. “Besides reducing the revenue the tax will generate, a host of new provisions would chip away at the base of the new tax and continue to leave big banks with a large share of the proposed rate cuts,” said Zach Schiller, report author and Policy Matters Ohio research director.

The Kasich administration first proposed the new tax as a part of its Mid-Biennium Review. The new Financial Institutions Tax (FIT) would replace the corporate franchise tax and the tax on dealers in intangibles on what was said to be a revenue-neutral basis. However, while parsing all of the effects of the proposal is difficult, it appears likely that financial institutions will pay less overall than they do now.

“Contradictory as it might seem, this bill as it stands would funnel what should be added revenue for the state right back to Ohio’s largest banks,” said Schiller. “The General Assembly should stick to the plan to cut loopholes, and use the additional funds to fight the foreclosure crisis and restore needed public services.” The brief includes recommendations for how to improve the tax proposal.