Giveaways increase even as lawmakers talk about reining them in

Even as state policymakers continue to talk about closing some of the tax loopholes that drain $7 billion a year from Ohio’s budget, the state legislature is creating more special-interest tax expenditures that will hurt the government’s ability to invest in the state’s economy, Policy Matters Ohio said today. Tax expenditures include exemptions, credits and deductions that reduce taxes. 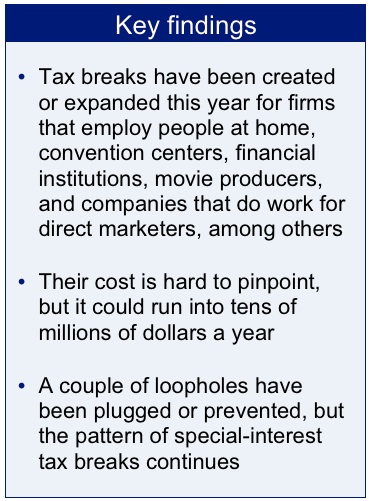 “It doesn’t make sense for the General Assembly to be carving out such exceptions in the tax code at a time when schools and local governments have seen their funding slashed, and human service programs are struggling,” said Zach Schiller, Policy Matters research director and the author of a new report on the subject.

The report identifies a variety of new tax exclusions and credits the Ohio General Assembly has approved this year. The legislature has created or expanded tax credits or exemptions for companies that employ people at home, convention centers, financial institutions, movie producers, and firms that work for direct marketers, among others. The state also converted a proposed tax credit for companies creating jobs at vacant properties into a grant program, illustrating how such tax measures are in fact the same as state spending.

Though the precise dollar figure for new loopholes can’t be determined, local governments and the state could forfeit tens of millions of dollars annually because of these tax expenditures. This is particularly troubling given the funding cuts that have been made to services vital to our economy, such as education, transportation, and safe communities, over the past year.

“It continues a pattern of monkeying with the tax code for the benefit of special interests,” said Schiller. “Policymakers should reverse the trend, use the proceeds from eliminating loopholes to restore public services, and make the tax code fair and level for all Ohioans.”