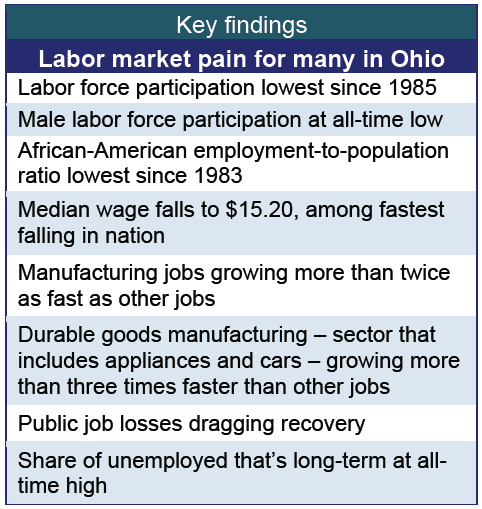 some of the findings of the State of Working Ohio 2012, a comprehensive review of the Ohio labor market by Policy Matters Ohio, embargoed for the Sunday before Labor Day.

“Three years into the recovery we’re not making sufficient progress on wages or job growth, and we’re failing to tap the talents of many of our neighbors,” said Amy Hanauer, report author and executive director of Policy Matters. “Ohio workers and families are not getting what they need from the public or the private sector.”

Leaving the labor market
For black Ohioans, the employment-to-population ratio plummeted to an alarming 48.6 percent in 2011, lower than at any point since 1983. Despite declines in labor force participation that keep discouraged workers out of the statistic, African Americans in Ohio were unemployed at a distressing 17 percent rate in 2011, the highest annual rate since 1986.