Despite a troubling number of mass layoffs in the state, Ohio is reducing its capacity to rapidly respond to layoffs and plant closings, according to a brief released today by the nonpartisan research institute, Policy Matters Ohio. 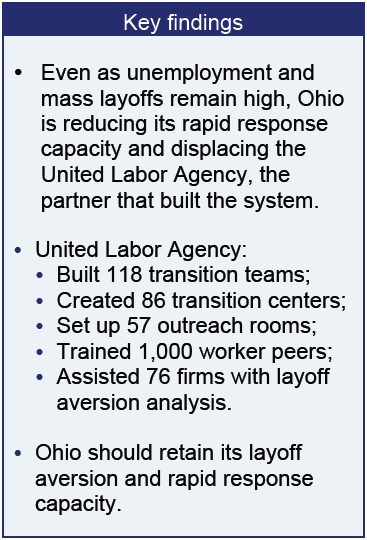 The state did not renew its contract with a partner that has built a solid layoff-aversion system, a decision that goes against federal government recommendations and cuts the state’s ability to serve the more than 9,000 workers who have lost their jobs to mass layoffs in Ohio this year.

“It is puzzling, in this economy, that the state would reduce rapid response capacity and fail to renew a contract with a high-performing partner,” said Hannah Halbert, researcher with Policy Matters Ohio and report author.

More than 9,600 workers lost their jobs as part of mass layoffs between January and August 2012 and more than 60,000 workers have gone through such layoffs in the last four years.

The U.S. Department of Labor suggests partnering with labor in this area and more than 20 states follow the recommendation. Ohio identified a high-performing partner in the ULA, which established an extensive infrastructure and dramatically increased referrals of displaced workers to local Workforce Investment Boards. The majority of WARN-impacted workers in Ohio belong to a union. The report concludes that Ohio should follow federal advice and maintain a rapid response system that meets the needs of workers and employers, that reflects the composition of mass-layoff employers, and that includes the solid partners who helped establish and grow the successful model that is now in place.

“Now is not the time to reshuffle or reduce rapid response services,” Halbert said.

Policy Matters Ohio is a non-profit, non-partisan policy research institute.
David Megenhardt, director of the United Labor Agency, is on the Policy Matters board of directors.