New tax revenue from the four casinos opening in Ohio will make up only a fraction of the cuts that local governments recently sustained because of slashed revenue from the state and the impending end of the estate tax, according to a new report by Policy Matters Ohio. 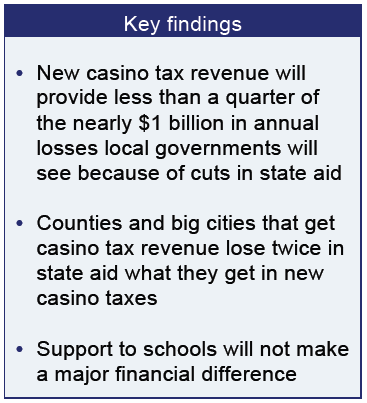 “While any new revenue is a welcome addition to strained local budgets, casino taxes won’t come close to making up for the cuts the state has imposed on local governments and schools,” said Zach Schiller, research director of Policy Matters and report author.

Tax revenue from casinos will go to counties, the four cities that house casinos and four other major cities. Even for these governments, the estimated amount they are to receive in casino taxes will average only half the revenue they are losing in the current state budget. Nor will casino-tax revenue for school districts make up more than a fraction of state cutbacks to education funding.

The planned opening of numerous gambling facilities makes the casino-tax estimates in the new report necessarily tentative. Based on several sources, these estimates reflect a comparatively optimistic assessment. The study compares expected casino-tax revenues with the loss in state aid from the Local Government Fund and tax reimbursements, along with the repeal of the estate tax.