If Congress does not act by December 29, federal benefits will be cut off that have for four years sustained aid to jobless workers in Ohio and across the nation, according to a brief released today by Policy Matters Ohio. Less than a quarter of Ohio’s jobless receive state unemployment compensation, but federal support has boosted that number to 39 percent. 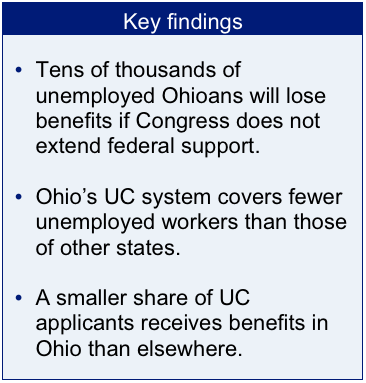 “If Congress doesn’t renew federal benefits, the impact in Ohio will be immediate and negative,” said Zach Schiller, Policy Matters research director and report author. “Not only will the unemployed suffer, but the state economy will take a hit as well.”

During the first nine months of 2012, the federal program paid more than $788 million to unemployed Ohioans. Since jobless workers are likely to spend nearly all of their benefits, UC also helps local economies. According to the U.S. Census Bureau, UC kept 2.3 million people from falling into poverty in 2011.

The new report explains how Ohio’s tough earnings standard and other rules exclude many jobless here from state UC who can receive it elsewhere, and how federal aid has played a critical role in supporting both families and communities. Since mid-2008, the unemployed in Ohio as elsewhere have been able to receive additional benefits after the end of their state UC benefits, which last up to 26 weeks in Ohio and most states. In Ohio, jobless workers currently are able to receive up to an additional 37 weeks of these federally supported benefits. Nearly 50,000 Ohioans have been claiming these benefits each week, but the bulk of them will have their benefits cut off if the program is not continued.

In 2011, according to data from the U.S. Department of Labor, 63 percent of Ohioans who filed initial claims for UC benefits received first payments, compared to 71 percent for the United States.  This indicates that the state’s eligibility rules and the process it uses for determining eligibility in Ohio are at least as stringent, if not more so, than those of other states across the country.

“Ohio’s UC already covers too few of our unemployed,” said Schiller. “Congress should continue federal support for UC benefits to avoid the loss of benefits for tens of thousands of Ohioans.”