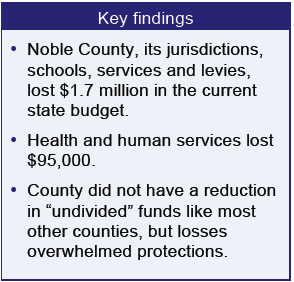 Ohio’s budget for 2012 and 2013 cut local government aid by a billion dollars. This means cuts in services we depend on, from road repair and emergency services to crossing guards, senior transportation and child protective services.  What are the implications for Noble County?

The state cut the Local Government Fund to the county, forcing Noble County to make cuts to jurisdictions within the county. The state also cut direct funding to municipalities, and slashed reimbursements for taxes it had eliminated, taxes that businesses and utilities had paid to local governments. School districts and the public library fund were also cut. Losses in calendar years 2012 and 2013, compared to 2010 and 2011, include, among others: 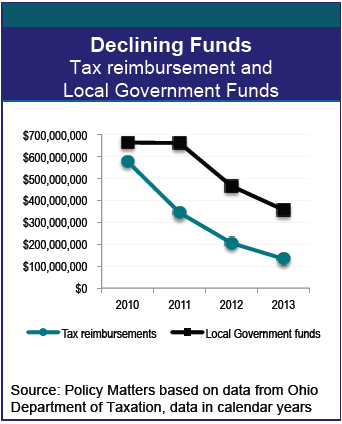 Lowell Anderson, mayor of Caldwell Village, explained that he increased the income tax by 1 percent but felt that the village would repeal it in November. They were beginning to do water and sewer infrastructure projects. Also, there was a lot of interest in doing natural gas exploration in the county. The mayor and his advisors were meeting to determine if this was a good idea. Would have to lease out 280 acres and could make $1.4 million. The downside to that was that a lot of the exploration would occur near the Caldwell Reservoir, which provides drinking water for the village. From “Mayor responds to criticism about 1% income tax enactment,” Marietta Times, 12 April 2012. http://bit.ly/QdTsYT.

Emma Fleischer, chair of Ohio Family and Children First Council, explained that this county had not been able to pay her employees enough. Minimal staffing had doubled caseloads, and her agencys struggled to maintain even those levels. Poverty has increased in the county; without public transportation people could not afford to come in for assistance. She said she saw many cases of heroin abuse as well as opiates and bath salts. She explained that children’s services have had many layoffs as well. Mental health has been turning people away and could not get enough psychiatrists to work. Families have had to go to Columbus or Parkersburg, West Virginia, for assistance. From phone interview, June 26, 2012.