President Obama and Congress have the chance to make smart budget decisions that can stabilize families, raise resources from those most able to pay, and keep in place important programs that reduce poverty and build the middle class. As we navigate those choices, here are two novel ideas to keep in mind: don’t make a deal that increases inequality and don’t make a deal that impoverishes more children. 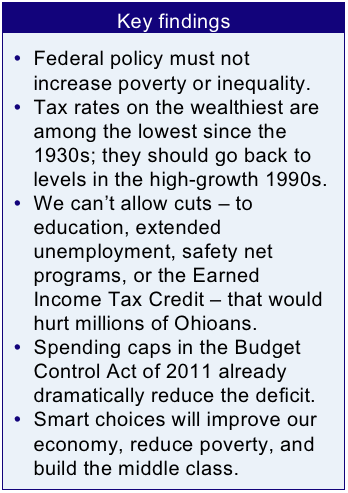 What pundits have been referring to as a “fiscal cliff” refers to automatic tax increases and spending cuts that will begin if a deal is not reached by January 2. Tax rates on the wealthiest are almost as low as they’ve been since the 1930s. These are set to go back to the still-low rates that prevailed in the high-growth 1990s, and they should. Tax rates on the middle class are also set to increase without action. Those rates should be kept low.

Congressional leaders are promoting an approach to taxes and spending that would get rid of unemployment insurance for thousands of Ohio families, create deep cuts in programs that support individuals, families and communities, and eliminate cuts that have reduced taxes for middle-class and poor families.

As they move toward an agreement, policymakers must ensure that deficit reduction: