At least two companies are making payday loans in Ohio using vehicle titles as collateral, selling bigger loans at triple-digit rates that are potentially more dangerous for Ohio families than traditional payday loans, according to 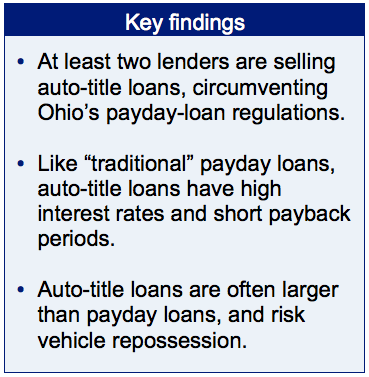 Keys for Collateral, a new report by Policy Matters Ohio.

“Lenders have circumvented Ohio legislation designed to limit payday lending, and have begun operating under laws intended for other purposes,” said David Rothstein, report author and project director for asset building at Policy Matters. “These loans put struggling families at risk of losing the vehicles they depend on for their livelihood.”

Policy Matters investigated the practices of two companies working in Ohio. Ace Cash Express directly sells auto-title loans using the Ohio Mortgage Loan Act. Except for Ace’s use of auto titles rather than post-dated checks as collateral, these loans look like traditional storefront payday loans. The other company, LoanMax, sells auto-title loans by brokering loans with third parties. LoanMax’s 30-day loan term is longer than the term of two weeks or less at Ace and storefront lenders. The amount of the type of loan offered by LoanMax can be much higher, ranging from $2,500 to $10,000.

“The Ohio Department of Commerce and the state’s attorney general have the authority to prohibit companies from using improper laws to make payday and auto-title loans, and they should do so,” said Rothstein. “For its part, the Ohio General Assembly should take steps to specifically prohibit auto-title lending. These basic steps would go a long way toward protecting Ohioans from predatory lending practices that are opposed by an overwhelming majority of Ohioans.”