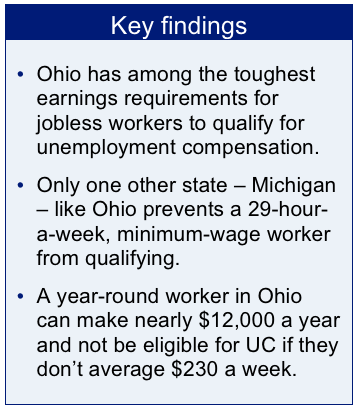 their counterparts in almost any other state to qualify for unemployment compensation, according to an analysis Policy Matters Ohio released today. Ohio is the only state besides Michigan where the following workers, employed all year, would not qualify for benefits:

Policy Matters reviewed how Ohio’s monetary eligibility standard compared with that of all other states and the District of Columbia. Every state sets its own standard for how much one must earn in order to qualify for unemployment compensation (UC). This year, Ohio requires workers to earn on average at least $230 a week for at least 20 weeks of work to qualify for benefits, or annual earnings of at least $4,600.

Only North Carolina and Washington require higher minimum earnings during the base year of employment. Yet in Ohio, year-round workers can make close to $12,000 a year and not be eligible if they average less than $230 each week. The high monetary requirement is one reason fewer unemployed Ohioans receive benefits than jobless workers do in most other states.

“Ohio should look to reduce the monetary requirement,” said Zach Schiller, Policy Matters research director and report author. “The fairest standard links eligibility to hours worked rather than to a minimum dollar amount.”

Ohio currently owes $1.77 billion to the federal government, which was borrowed to pay UC benefits after years in which the state underfunded the system. “As policymakers consider how to respond to this issue, they should bear in mind that Ohio’s earnings requirement excludes many workers,” said Schiller, “Further ratcheting up this standard would both penalize low-wage, part-time workers and push Ohio even more outside the mainstream.”