Income tax cuts will increase inequality in Ohio and do little for our economy. The Kasich administration proposal to broaden the sales tax base, if done carefully, is helpful because our economy has shifted to services, many of which have been untaxed. However, this will disproportionately affect low- and middle-income Ohioans, so steps should be taken to offset that.

The Kasich administration proposal to cut income taxes and expand sales taxes would produce big tax cuts for Ohio’s most affluent residents while increasing taxes on lower- and moderate-income families.

Those are the results of an analysis by the Institute on Taxation and Economic Policy for Policy Matters Ohio. Table 1 provides the breakdown of the overall impact of the changes proposed by the Kasich administration, excluding the governor’s severance tax plan.

“Income tax cuts will increase inequality in Ohio and do little for our economy,” said Zach Schiller, Policy Matters Ohio research director. “The Kasich administration proposal to broaden the sales tax base, if done carefully, is helpful because our economy has shifted to services, many of which have been untaxed. However, this will disproportionately affect low- and middle-income Ohioans, so steps should be taken to offset that.”

The Kasich administration proposal has a number of elements. Owners of S Corporations, limited liability companies and other “passthrough entities,” who pay individual income tax on income from them, would see a 50 percent cut for the first $750,000 of such income they receive. ITEP found that this will produce more than a $4,000 gain on average for those in the top 1 percent, who would receive more than half total tax cut. Those in the next 4 percent, who make between $143,000 and $335,000, would receive most of the rest of the tax reduction, averaging $542 a year. The other 95 percent of Ohio residents would receive scant gains. Table 2 shows how these gains would be distributed.

The proposal to cut income-tax rates by 20 percent over three years also would reward those at the top of the income scale, while providing only small tax cuts for most Ohioans. The top 1 percent on average would see a tax cut of $7,777 a year, while middle-income Ohioans would see a $144 reduction and those in the bottom fifth would get a mere $7 on average.

Table 2 also shows the total of the two income-tax cuts, which would provide an $11,150 gain on average for the top 1 percent, $157 for the middle fifth of Ohio residents and only $8 for the bottom fifth. Just 12 percent of the income-tax cuts would go to the three-fifths of Ohioans who make less than $51,000 a year, while nearly half would go to the top 5 percent, who make more than $143,000. 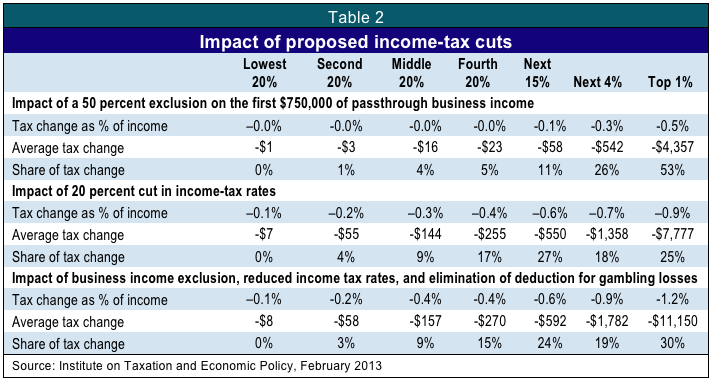 These income-tax cuts would further tilt Ohio’s state and local tax system in favor of the state’s wealthiest residents. A separate report issued in January 2013 by ITEP showed that overall, Ohioans in the top 1 percent pay considerably less of their income in state and local taxes than middle-class and poor Ohioans do. (see www.policymattersohio.org/income-tax-jan2013)

In addition, more than one dollar out of every eight that Ohioans would save in state income tax under the Kasich proposal would not stay in Ohioans’ pockets, but would go to pay federal taxes, ITEP found. That’s because Ohio taxpayers can deduct state income tax from their federal tax bill, so a state income-tax cut will mean higher U.S. tax payments.

ITEP also examined the effects of the administration’s sales-tax proposals. These include extending the sales tax to services unless they are specifically exempted and reducing the state sales tax rate from 5.5 percent to 5 percent, while reducing county and transit agency piggyback sales tax rates so they only produce a modest revenue increase from the base broadening.

As shown in Table 3, Ohio residents in every income group pay more. The top 1 percent on average will pay $781 more a year, while middle-income Ohioans will pay $165 and low-income residents, $71. However, residents toward the bottom of the income scale are affected more in comparison to their income. Extending the sales tax to additional services, even with the exclusions proposed, will hit lower-income Ohioans more, in part because they spend a greater share of their income.

For that reason, if the sales tax base is broadened, steps should be taken to offset the impact on low- and moderate-income Ohioans. Policy Matters Ohio will produce additional reports on how this could be accomplished, but one obvious step is to implement a refundable state Earned Income Tax Credit, as more than 20 states already have. This tax credit for working families can be instituted as a percentage of the existing federal EITC, which more than 900,000 Ohioans receive annually. The General Assembly also should consider adding sales tax credits. Other states with broad sales taxes, like New Mexico and Hawaii, have such credits, which provide a flat amount for each member of a family below an income threshold. Finally, careful consideration needs to be given to the services that are excluded from taxation.

All of these measures would be useful steps to counteract the effect of a broader sales tax on those who are least able to do so. However, it’s also important to maintain and bolster the state’s progressive income tax, instead of weakening it as the Kasich administration would do.

(Data notes:  The ITEP analysis covers Ohio residents and is based on 2012 income levels. The sales-tax analysis includes state and local sales taxes, as well as administration proposals to cover magazine subscriptions and digital goods and services under the sales tax. The income-tax analysis includes the administration proposal to eliminate a deduction for gambling losses, but does not include the repeal of the double exemption for dependents. Gov. Kasich’s proposal to increase the severance tax on oil and gas is not included in the overall analysis, but that would mostly be paid by out-of-state taxpayers).

Policy Matters Ohio is a nonprofit, nonpartisan state policy research institute with offices in Cleveland and Columbus.
The Institute on Taxation and Economic Policy (ITEP) is a non-profit, non-partisan research organization
based in Washington, D.C. that works on federal, state, and local tax policy issues. ITEP’s Microsimulation Tax Model
allows it to measure the distributional consequences of federal and state tax laws and proposed changes in them,
both nationally and on a state-by-state basis.