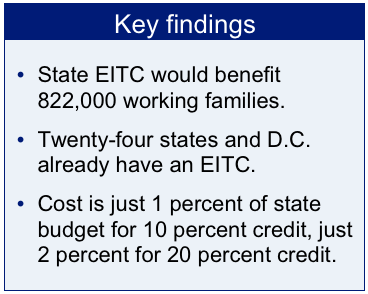 A refundable state Earned Income Tax Credit would help 822,000 working families across Ohio, according to a report released today by Policy Matters Ohio.

“A state EITC would be a low-cost supplement to the federal credit, which is largest anti-poverty program in the country,” said David Rothstein, project director for Policy Matters Ohio. “The EITC is a small investment that makes a big difference by targeting aid directly to working families with children.”

Set at 20 percent, a mid-point in the range of other states, an Ohio EITC would provide the average recipient $446 a year, according to the report, which is based on analysis by the Institute for Taxation and Economic Policy. Fifty percent of the state EITC would go to those with earned income making between $18,000 and $33,000.

Twenty-four states and the District of Columbia already have state EITCs. Today’s report analyzes the impact of a state EITC program in Ohio and calls for it to be part of the sales and income tax changes.

“A state EITC should be part of any income-tax system, but is especially critical when legislators are considering raising taxes on those who have the least ability to pay,” said Rothstein. “The EITC is incredibly effective at ensuring that working families are able to provide for their families. EITC dollars boost local economies because they are spent and saved locally, an added bonus of this sensible policy.”